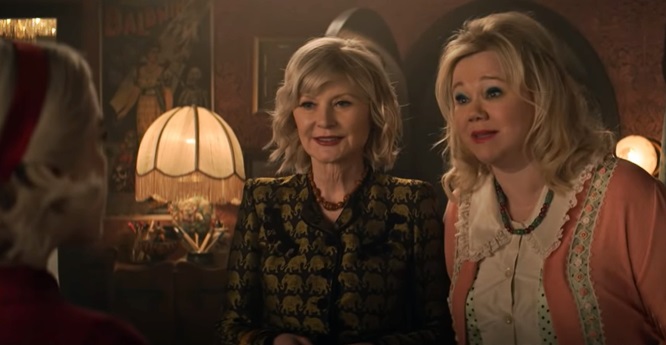 When Chilling Adventures of Sabrina Part 4 releases on Netflix on December 31st, don’t be as surprised as Sabrina herself when it turns out her Aunt Zelda and Aunt Hilda look a lot different than they did before.

That is because, on one episode of Chilling Adventures of Sabrina Part 4, Aunt Zelda and Aunt Hilda will be none other than the original aunts from the 1990s live-action sitcom Sabrina the Teenage Witch, aka played by actresses Beth Broderick and Caroline Rhea.


The two iconic actresses will cameo in just one episode — an episode where Sabrina seems to be the star of a sitcom, although she has no idea what is going on or why.

Check out the clip below to watch the first time Sabrina comes across her new aunts, and to see her confusion.

Yep, that looks like a helluva lot of fun.

Chilling Adventures of Sabrina Part 4 will be the last episodes

Of course, during the usual Chilling Adventures of Sabrina, Zelda and Hilda are played by Miranda Otto and Lucy Davis. They will be back to reprise their parts for the rest of the episodes of Part 4 of the series.

Episodes that are, sadly, the last ones we will be getting as the series has been cancelled by Netflix. (continue reading after the promo…)

Listen to Kingsbury’s ‘Blurry Now’ from Chilling Adventures of Sabrina — it’s so catchy!

With just 8 episodes to go then, according to Netflix, this is what you can expect:

The Eldritch Terrors will descend upon Greendale. The coven must fight each terrifying threat one-by-one (The Weird, The Returned, The Darkness to name a few), all leading up to…The Void, which is the End of All Things.

As the witches wage war, with the help of The Fright Club, Nick begins to slowly earn his way back into Sabrina’s heart, but will it be too late?

Sounds like fun, but can I just ask, if Beth Broderick and Caroline Rhea are showing up on Chilling Adventures of Sabrina, shouldn’t the fabulous Melissa Joan Hart be putting in an appearance too?

You can currently watch the first three seasons of Chilling Adventures of Sabrina on Netflix. Season 4 (Part 4) will be up there too starting December 31st.