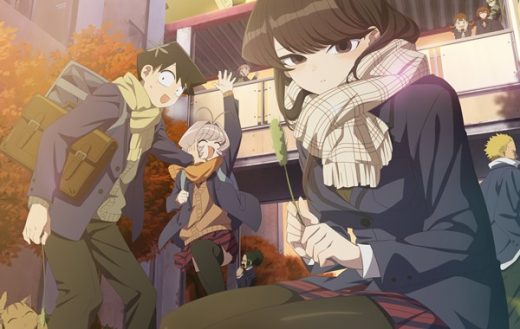 The official Twitter account of the Komi Can’t Communicate anime has announced the second season will premiere on April 6th in Japan.

Along with that announcement, a second Komi Can’t Communicate Season 2 key visual was released showing Komi, Tadano and Osana at school in the foreground of the visual using a cattail stalk to try to lure a cat, as upcoming scenes from the romantic comedy are shown overhead.


Komi Can’t Communicate is based on the manga by Tomohito Oda, and had its first season released on Netflix in October, 2021.

The anime became one of the most successful to air on Netflix, so it’s not surprising a second season was quickly greenlit.

The popular anime tells the story of high school student Komi, who desperately wants to make friends but suffers from such intense social anxiety she finds it impossible to talk to anyone.

That is until Tadano, a boy in her class, tries to make friends with her and realizes she’s isn’t a snob or feels like she’s better than everyone else at all — she’s just shy!

That’s when Tadano makes it his job to help Komi make 100 friends. Although, the way Komi acts, he definitely has his work cut out to make that happen, right?!

The first season of Komi Can’t Communicate is currently streaming on Netflix.

VIZ Media is publishing the English version of the manga series with 17 volumes out, and the 18th due to be published on April 12th.

Keep an eye out for Season 2 of the anime hitting the streaming platform on April 6th and, of course, check out the just released Komi Can’t Communicate Season 2 key visual above, as that art style sure is cute.