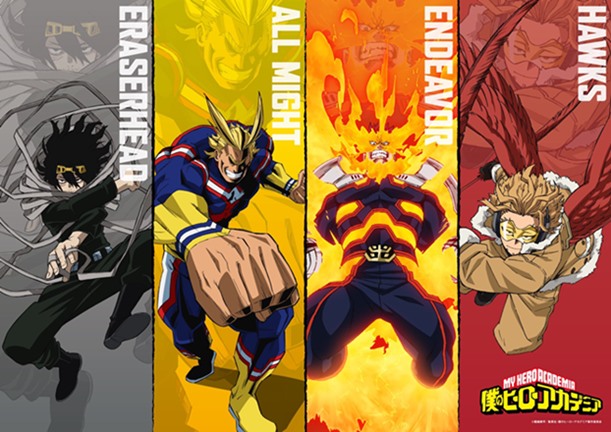 With little news to go on about the upcoming Season 5 of My Hero Academia, there was welcome news on the hit anime’s official Twitter account today with a release of new character visuals for four professional My Hero Academia heroes. (See above)

The four heroes featured in the action-packed graphic are Eraserhead, All Might, Endeavor and Hawks.

Fans, of course, immediately went nuts over them.

Season 5 of My Hero Academia is scheduled to premiere in Japan on March 27th, with a release in the west soon after.

As if that wasn’t exciting enough, the third film in the My Hero Academia franchise was also announced last November, with a summer, 2021 release time expected.

The creator of the manga, Kohei Horikoshi, is developing the character designs, as well as supervising the film.

As Crunchyroll reported when the upcoming film was announced, the translation of Horikoshi’s comment was the following:

We’re now bringing you the third film! Thank you for your continued support of Deku and the others!
When we announced the second film, I made a “there will be no other films” kind of comment, but here it is. We have the support of so many people, I can’t figure out which way to bow, so I stuck my head in the ground.”

Yep, he was kind of excited!