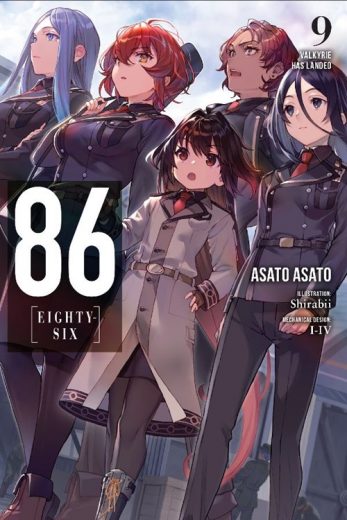 Just a quick reminder, if you are into the 86–EIGHTY-SIX light novel series as much as I am, the latest volume of the sci-fi epic is now available via Yen Press.

And, just in case you have forgotten what happened at the end of the light novel series’ previous volume, here’s what the publisher has to say about the events to come in 86–EIGHTY-SIX Volume 9:

For better or worse, the battle with the Noctiluca has drawn to a close…for now. The Eighty-Six’s minds are heavy with thoughts of close friends and bitter enemies swallowed by the cold, dark abyss. Among the casualties are Shana, Shiden’s vice captain, joining the fallen in their watery grave, and Theo, whose loss of his left hand had all but sealed his fate as a Processor. As Shiden swears revenge, Kurena, who blames herself for Shana’s death, cracks beneath the weight of her guilt.

While the Eighty-Six struggle to pick up the pieces, though, the Legion inexorably pursue their bloodless objective, and the Noctiluca has reportedly taken refuge in the surviving Holy Theocracy of Noiryanaruse. Now Shin and company must set foot in the mysterious western nation of which even the United Kingdom and the Federacy are wary…

Grab it now as a trade paperback or digital download from the publisher. and check out that beautiful 86–EIGHTY-SIX Volume 9 cover art by Shirabii at the top of this page.