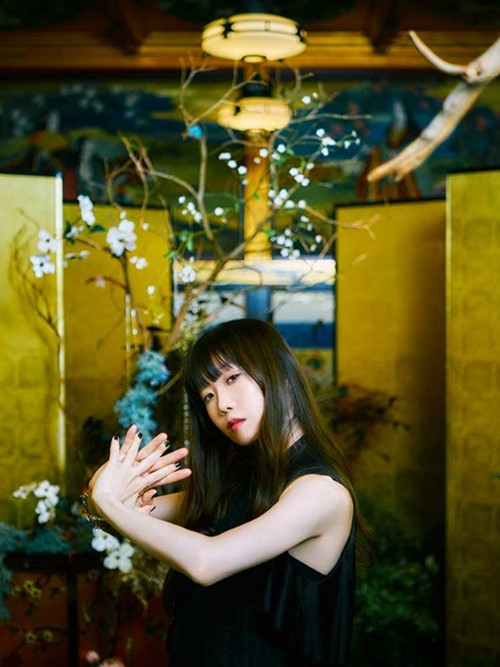 While it isn’t surprising Aimer’s ‘Zankyo Sanka‘ has hit almost 2 million views on YouTube in just over 24 hours since its release, after all it is the Demon Slayer: Kimetsu no Yaiba Entertainment District Arc opening theme song and fans are obsessed with the anime series, what is surprising is what a dull song the thing is.

And what a disappointment of a release, especially coming from Aimer.

Particularly for me, someone who is a huge Aimer fan and has loved almost everything else she has produced.

‘Zankyo Sanka‘, on the other hand, not so much.

In fact, I hadn’t even realized ‘Zankyo Sanka‘ was the much-talked about Demon Slayer: Kimetsu no Yaiba Entertainment District Arc  OP, considering I clicked on the video yesterday soon after it was released on Aimer’s YouTube channel, played the song through, thought it was mediocre compared to what she normally releases and then moved on with my day.

It was only when I saw Crunchyroll’s article about the Demon Slayer: Kimetsu no Yaiba Entertainment District Arc OP having reached over 1 million views in less than 24 hours, that it dawned on me this must be the song I had been waiting to hear for quite a few months now.

So, I went back for another listen, with the result ‘Zankyo Sanka‘ is even more “Meh” than it was the first listen through. The music video makes me want to poke my eyes out.

What makes the song so deathly dull is it doesn’t stand out from anything else Aimer has released in the last few years. In fact, it is so formulaic, it sounds exactly the same.

The same style of melody, the same vocals, the same drum beat — nothing about this stands out — except that the song is short and feels very rushed.

What makes ‘Zankyo Sanka‘ worse, however, is whoever produced this monstrosity (apparently Naoki Akiyama) went for loud music over vocals, with the result that in the chorus Aimer’s vocals all but disappear.

Covered by music that is so overpowering everything blends together in one mess of sound, and a melody that is so bland, I couldn’t remember what it sounded like five minutes after the video stopped playing.

Unfortunately, the music video has the same problem — style over substance — with its uniformed school girl running through a stylized Japanese city, surrounded by figures in extravagant costumes and periodically falling down, while fireworks go off in the background and the overly loud music pounds over all of it.

More like a parody of a Demon Slayer music video than the real thing. Especially because ‘the story’ it supposedly tells just isn’t interesting.

Sad to say, but it seems to me Aimer lost her vision and possibly her nerve with this release and decided to go for her same old sound but ‘bigger’ because, you know, that is how a Demon Slayer theme song is supposed to sound, right?

Rather than a song that might actually be unique and have something different to say.

Then again, neither of the two songs released by Lisa (the Demon Slayer: Kimetsu no Yaiba Mugen Train Arc OP and the ED), came close to the power of LiSA’s original Demon Slayer smash hit ‘Gurenge‘ either.

Which probably proves, as most music critics have always known, creating a hit song isn’t as simple as finding a formula and sticking to it. There has to be something special and unique for it to grab people’s attentions, and have them still wanting to listen to it a year from now.

Unfortunately for Aimer’s ‘Zankyo Sanka‘, I don’t want to listen to it 24 hours from now. It really is that dull.

You can listen to ‘Zankyo Sanka‘ on Aimer’s official music video below. Me? I’ll pass.

Her ‘One and Last‘ release last week, though?

That’s brilliant and something I will still be listening to five years from now, because that song is not only beautiful, it is intelligently written.

And therein lies the difference.