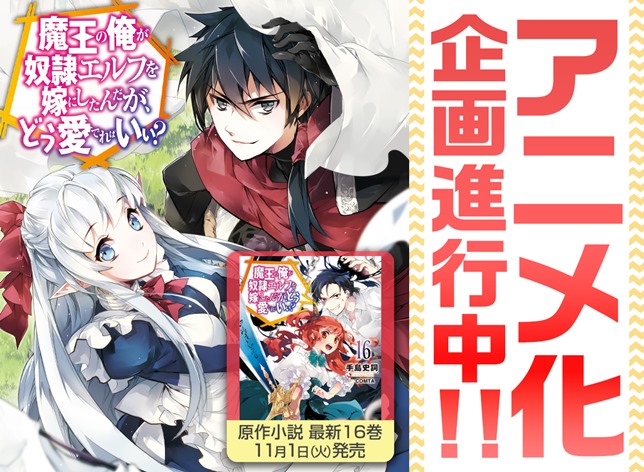 The fantasy light novel series An Archdemon’s Dilemma: How to Love Your Elf Bride is getting an anime adaptation.

The upcoming anime was announced today on publisher HJ Bunko’s Twitter account, with staff, cast and premiere date not yet released.

There are currently 15 novels out in Japanese, with the 16th due to be published next week, as well as a manga adaptation.

J-Novel Club, who publishes the light novels in English, has this to say about the An Archdemon’s Dilemma: How to Love Your Elf Bride plot:

Zagan is feared by the masses as an evil sorcerer. Both socially awkward and foul-mouthed, he spends his days studying sorcery while beating down any trespassers within his domain. One day he’s invited to a dark auction, and what he finds there is an elven slave girl of peerless beauty, Nephy.

Having fallen in love at first sight, Zagan uses up his entire fortune to purchase her, but being a poor conversationalist, he has no idea how to properly interact with her. Thus, the awkward cohabitation of a sorcerer who has no idea how to convey his love and his slave who yearns for her master, but has no idea how to appeal to him, begins.

Keep checking back, as we will update you with more information as soon as we get it.