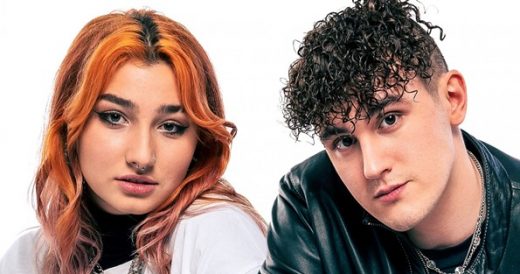 Anybody who watches the Eurovision Song Contest knows Austria doesn’t have a particularly stellar record of entering good songs.

Sure, country won in 2014 with Conchita’s ‘Rise Like a Phoenix‘, and that song was a superb choice for ESC.

But when you look back at many of the songs Austria has entered over the last 60-plus years, it’s no wonder they (we (?) because I now live in the tiny Alpine country) have only won the world’s biggest music competition twice.

This year, however, Austria has picked a Eurovision Song Contest entry that, not only is it a catchy, addictive, ultra-modern, radio-friendly song that starts out as a helluva banger from note one, and then continues as a massive power song the whole way through, but this thing also stands a very good chance of ending in the Top 5.

Filmed as it was in one of Vienna’s major museums, and revolving around the two artists on a circular stage performing with dancers costumed in Viennese-style outfits accompanying them.

My only two concerns for ‘Halo‘ by LUM!X and Pia Maria on the night are 1) that the staging of the song at ESC will have to be pretty spectacular to show it off as it deserves, and 2) Pia Maria’s vocals need to be superb for this to be a standout song.

If they manage both of these things, though, ‘Halo‘ could well be a Eurovision Song Contest 2022 success for Austria and, God knows, after years of the country sending songs I just can’t listen to, it’s a fabulous change to be supporting a song that’s actually cool.

Austria will be competing in the first ESC semi-final on Tuesday, May 10th in Turin, Italy.

If LUM!X and Pia Maria make it through to the final (and they should with this!), they will perform the song a second time on May 14th in the Eurovision Song Contest final.

Now let’s just hope we don’t have to watch another massive audience wearing masks in May, as every time I see yet another crowd of people being forced to muzzle themselves in worthless face diapers, I’m so damned triggered, I just turn the thing off.

Until then, listen to Austria’s Eurovision Song Contest 2022 entry — ‘Halo‘ by LUM!X and Pia Maria — in the song’s official music video, and then tell me that’s not a banger, eh?

Man, I really am psyched for this!!! And, considering what throwbacks to the 90s Austria often sends to ESC, I’m shocked.