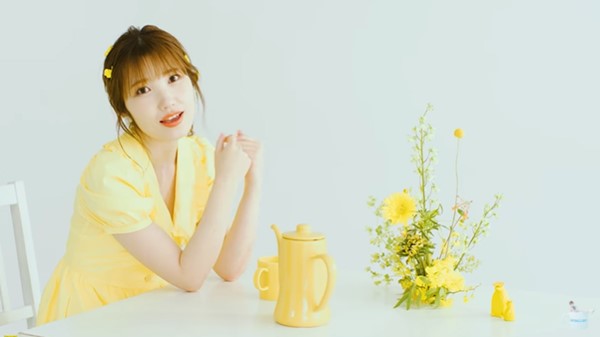 The video was released on the singer and voice actress’s YouTube channel on the day the song’s CD came out in Japan. It is her sixth official single.

Aya Uchida’s ‘Canary Yellow‘ music video features the singer filmed against a white background wearing either a yellow dress or a white dress embroidered with flowers, and surrounded by yellow flowers.

The visuals in the video are gorgeous, the song is catchy and Uchida’s voice is cute and sweet.  In other words, Uchida’s ‘Canary Yellow‘ music video is adorable.

It also features the ‘Canary Yellow‘ lyrics in Japanese, English and Chinese (hit the CC button on the video), which is a nice often-missing touch from other Japanese music companies.

In the case of Aya Uchida’s ‘Canary Yellow‘, the lyrics tell the story of a girl who is loving being in love, but is worried that the love may disappear in the future just like the flowers as they die.

Related: The Let’s Make a Mug Too: Second Kiln trailer shows off the anime’s stunning artstyle and those adorable girls

Listen to the Let’s Make a Mug Too: Second Kiln ending theme song in its music video below, then re-listen to it for a few hours later as you can’t get that addictive melody out of  your head.