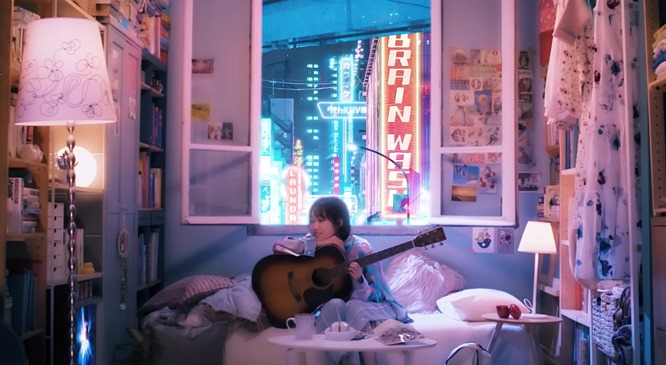 Azusa Tadokoro’s ‘Drum-shiki Tansaki‘  (aka Drum-type Space Probe) is the By the Grace of the Gods 2 ending theme song and, if you had to think of a more appropriate song to fit that purpose, it would be difficult to do.

That is because Azusa Tadokoro’s is a sweet, upbeat, must-dance-to-this song that is perfect for the relaxing, slow living, superb chill anime that is By the Grace of the Gods.


The same atmosphere that is also featured in Azusa Tadokoro’s ‘Drum-shiki Tansaki‘ music video, which came out yesterday just in time for the premiere of the second season of the anime.

It features the Japanese singer alone in her tiny room above a high-tech neon-lights illuminated city, spending time by herself reading, playing music, thinking and dreaming. Simply just chillin’.

It ends as she falls asleep, and dreams she is floating in the starry heavens.

That Azusa Tadokoro sings the song is also immensely appropriate as, not only does she voice the anime’s slime-collecting protagonist Ryoma Takebayashi, she was also the artist responsible for Season 1’s lovely opening theme song ‘Yasashii Sekai‘ back in 2020.

By the Grace of the Gods Season 2 premiered in Japan yesterday, and is currently streaming on Crunchyroll.

Listen to the By the Grace of the Gods Season 2 ending theme song in Azusa Tadokoro’s official music video for the track down below.

You can also watch the trailer for the new season down there as well.