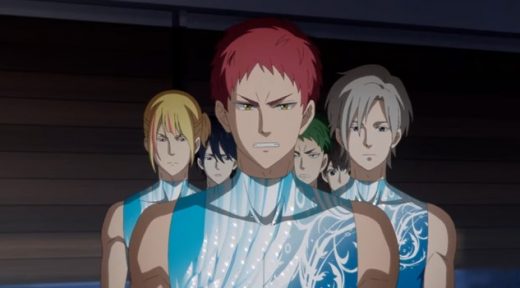 The upcoming Bakuten!! movie got a new and very cute key visual yesterday. This one featuring all our favorite guys at a lookout appearing to be incredibly excited over what they are seeing. (Check it out below)

The Bakuten!! movie (aka Backflip!! movie) was announced last year after the ending of the first season of the popular gymnastics anime series.


It is due to premiere in July.

Along with the release of this weekend’s Bakuten!! movie key visual on Twitter, an announcement was made that the ‘information blackout’ was now over, and so the official website was also up and adding new information about the anime film.

The first season of Bakuten!! followed Shotaro Futaba as he joined his high school gymnastics team.

The last episode of the series ended with the team winning the first round of the Inter-High tournament. So, of course, fans need the movie so they can find out what the outcome ends up being.

Bakuten!! is directed by Toshimasa Kuroyanagi (Love Me, Love Me Not), with the script and series composition by Toshizou Nemoto (Steins;Gate).

Check out the cute new Bakuten!! film key visual above, and the teaser trailer for the movie below, and keep up-to-date on more information about the film on its official website.

The website itself talks about the movie this way — “The final challenge of “Ao High School Rhythmic Gymnastics Club”, which kicks off with 6 people, begins.”

Yep, it sounds like the movie will be the last time we see Shoutaro, Ryouya and the rest of our favorite dudes in action. And that’s kinda sad.