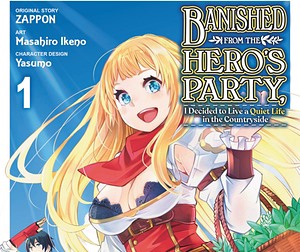 I have to admit I was happy when I saw Yen Press is now publishing the English version of the Banished from the Hero’s Party manga series.

After all, I did binge-watch the anime series based on the light novel series written by Zappon and illustrated by Yasumo, and loved it. But, not being a light novel fan, I wasn’t likely to do anything more than that.

With the English version of the manga now easily available though, hey, I can get my Red and Rit fix a little longer. Yay!


The manga is available via Yen Press in both trade paperback and digital file and, with Banished from the Hero’s Party manga volume 1 already published, and with volume 2 coming out on June 22nd, we have a fair bit of reading ahead of us.

Especially as there are already eight volumes out in Japanese.

Yen Press talks about the first volume of the Banished from the Hero’s Party, I Decided to Live a Quiet Life in the Countryside manga series in this way:

“You are not a true comrade.”

After finding himself unable to keep up with the hellish fighting on the front lines of the war against the demon lord’s army, Red is finally kicked out of the Hero’s party. Ashamed of his inadequacy, he moves to a distant frontier region where nobody would know his face or past.

However, once he gets over the funk of having to leave his adventuring days behind, he’s actually excited to begin a quiet life as an apothecary…which becomes a whole lot more lively when a former party member and actual princess, Rit, pays him an unexpected visit!

Grab it now via Yen Press, and mark your calendars for June 22nd for volume 2.