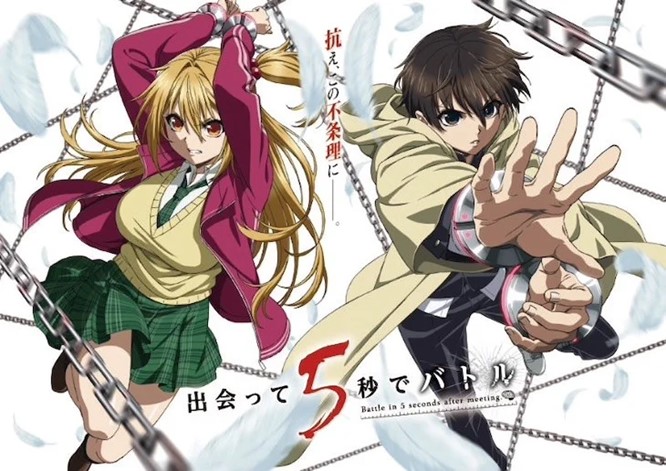 According to Comic Natalie, fans of the hit manga series Battle in 5 Seconds After Meeting (aka Deatte 5-byou de Battle) will be pleased with today’s news that the manga is getting an anime series.

Details of what we can expect, who will direct it, who is animating it and who will star in it are still to be released, but there is an official Battle in 5 Seconds After Meeting website already online and a cool first key visual to get the series kicked off.


The graphic shows Amagaki Yuuri and protagonist Akira Shiroyanagi — two high school students who, along with many other people, have been killed, brought back to life and are now at the mercy of a mysterious woman called Mion. As far as their families are concerned, they are dead.

Once in a room with everyone else, the group is told that they have each been given a unique ability and they must now use it to battle each other — one on one.

The 15th volume of the popular manga series by Saizo Harawata and Miyakokasiwa will be published later this month,

With more than two million copies already sold, however, it is safe to say it is a huge success.