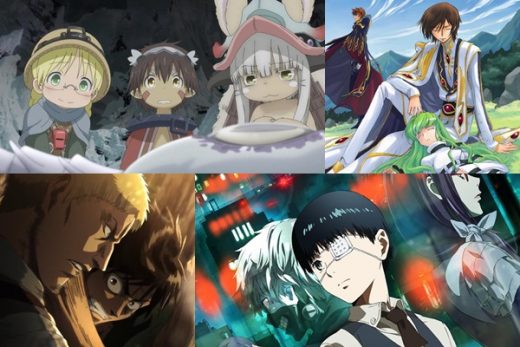 One of my latest obsessions is anime soundtracks. Not only because many of them include some of the most beautiful music ever written, but also because they bring back the intense emotions I felt when watching certain scenes from favorite anime series.

Recently, much of my Spotify playlist has been made up of anime soundtracks, so I thought it would be cool to share with you some of the anime music I have been listening to, and showcase some of what I believe are the best anime soundtracks on Spotify.


Soundtracks from anime like Made in Abyss, The Seven Deadly Sins, The Rising of the Shield Hero and many others.

Oh and a quick note to any composers of music for anime series that might read this and not have their soundtrack music on Spotify yet — GET IT ON THERE — as those composers that have are earning millions of plays per track, and expanding their fan base massively. 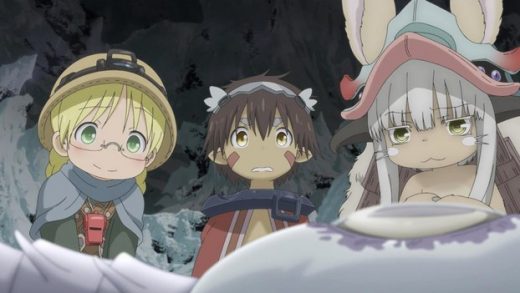 Made in Abyss soundtrack

Easily in my Top 10 best anime soundtracks ever released, the Made in Abyss soundtrack actually popped up on my radar before I even watched the anime series.

That was because many of the tracks were recorded at Synchron Stage Vienna by the Synchron Stage Orchestra and, because I am a music journalist who lives in the Austrian capital, I keep an eye on what’s happening here.

Falling in love with the Made in Abyss soundtrack had me heading to watch the anime and, as you can probably guess, it also quickly became one of my biggest loves.

The Made in Abyss soundtrack was composed by British-Australian composer Kevin Penkin, who has also composed the score for a couple of other major anime series. (You’ll find another of them below).

Listen to the anime’s soundtrack on the Spotify widget, and tell me there is a better piece of music for giving you goosebumps than the title track, and I won’t believe you.

Made in Abyss is currently streaming on Netflix. 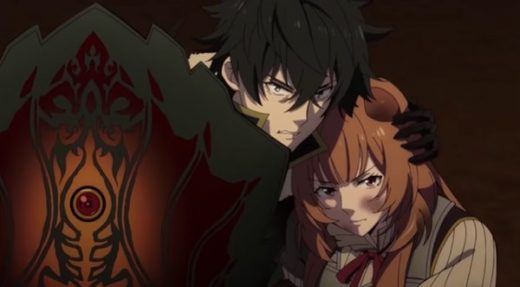 The Rising of the Shield Hero soundtrack “Dusk“

The second Kevin Penkin soundtrack I adore, and one of the best anime soundtracks of recent years, is one from another of my favorite anime — “Dusk” — aka The Rising of the Shield Hero soundtrack.

The four-minute-plus opening track named after the title of the anime series perfectly illustrates the emotions I feel watching that series, and luxuriating in the developing relationship between Naofumi and Raphtalia.

From its soaring violin to the way the music itself builds in power and emotion until it gloriously explodes, the piece perfectly encompasses what makes The Rising of the Shield Hero one of the best anime of recent years.

The rest of The Rising of the Shield Hero soundtrack is a wonderful reminder of an anime I will watch again and again in coming years.

The Rising of the Shield Hero is streaming via Crunchyroll. 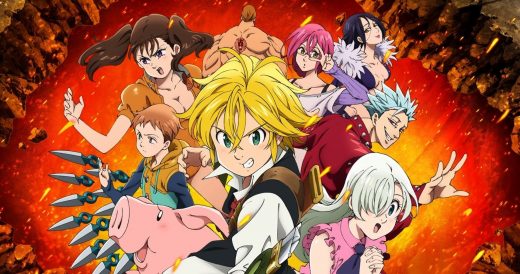 The Seven Deadly Sins soundtracks from every season are now available to listen to, with a couple of them definitely being some of the best anime soundtracks on Spotify.

My favorite out of all of them, though, is The Seven Deadly Sins (Original Soundtrack) as it features one of my favorite pieces of music from the anime series — ‘Perfect Time‘, a piece that begins with such a gorgeous Irish-feel to it and then explodes into an enormous power track, I sometimes play over and over again while I dance around my living room.

Because, hell, the energy you can gain from that!

The Seven Deadly Sins (Original Soundtrack) was composed by Japanese composer Hiroyuki Sawano, who is rapidly heading towards 2 million followers on Spotify, his soundtracks are so loved.

Sawano has also uploaded the other soundtracks for subsequent seasons of The Seven Deadly Sins to Spotify, along with music he has composed for other anime series, so don’t miss listening to them as well, as they are equally as gorgeous.

Every season of The Seven Deadly Sins, plus movies, are streaming on Netflix. 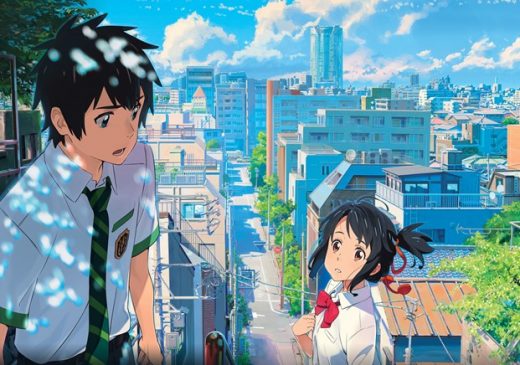 Your Name soundtrack (aka Kimi no Na wa soundtrack)

It is the band’s eighth studio album, it took RADWIMPS over a year and a half to compose the score for the film and, if you pick out just one track from the entire 27-track release, you will release the utter genius of this music.

After all, if you have watched Your Name, you only have to listen to a track to remember the intense emotions you felt as those gorgeous scenes moved across the screen. Much of them brought on by the music accompanying the animation.

My favorite tracks from the Your Name soundtrack are actually three-fold — the 1 minute 32 second instrumental ‘Cafe at last‘ and its almost American country-style blended with jazz feel, ‘Nandemonaiya‘ with its touching a cappella first vocals from singer Yojiro Noda and, of course, ‘Sparkle‘ (the Japanese version), as it appeared in Your Name during one of Taki and Mitsuha’s ‘magic hours’.

And, if that’s not enough, remember RADWIMPS composed the music for Weathering With You as well. 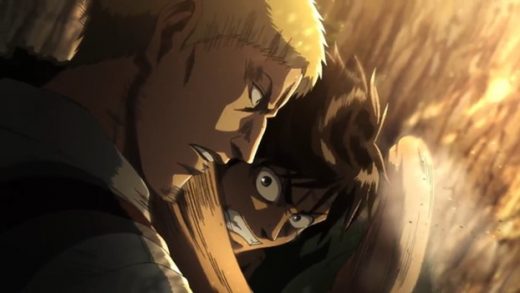 And just a side note before I get started, Sawano does have the soundtracks to Seasons 1 and 3 of Attack on Titan on his Spotify account, but Season 2 is currently my favorite.

Because the instrumental ‘You See Big Girl/ T:T‘ conveys everything people feel about Attack on Titan — the sorrow, the pain, the majesty, the courage, the brutality, the tragedy and, yes, the hope — and the vocals that end the piece are heart-breaking.

Related: Music video of Attack on Titan‘s theme song ‘Akuma no Ko‘ released, with so many beautiful scenes from the anime series — Watch!

And I could go on and say I love ‘Call of Silence‘, the haunting ‘Son 2 Sea Ver‘ and the lovely guitar-driven German/English-language ‘So Ist Es Immer‘ but, if truth be known, there isn’t a bad track on this entire 33-track album.

It really is anime soundtrack perfection. 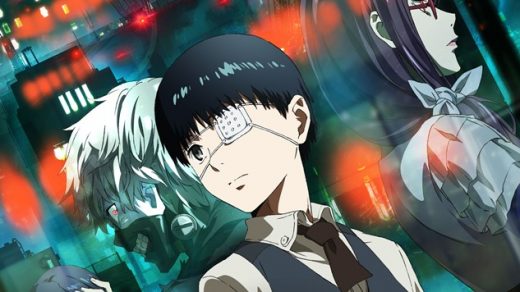 It is pretty much impossible to choose the best anime soundtracks on Spotify without picking at least one (actually more, as you’ll see) of Yutaka Yamada’s soundtracks.

Yamada is another ridiculously prolific Japanese composer who, at the still crazy young age of just 32, has created some of the best anime music in the last two decades. (Think Tokyo Ghoul‘s gorgeous theme song ‘Glassy Sky‘, yep, that’s Yamada’s).

Of course, I had to have on my list one of the first anime soundtracks Yutaka Yamada composed from one of the best ever anime series.

The Tokyo Ghoul soundtrack, which begins with the discordant and wild track ‘TG Symphonie‘ in all its majesty, also features stunningly beautiful pieces like the softly sweeping ‘Regenbogen ‘, the last track on the album ‘ON MY OWN‘ and, of course, both the aforementioned ‘Glassy Sky‘ and one of the most addictive pieces of music to ever appear on an anime soundtrack ‘Licht und schatten‘. 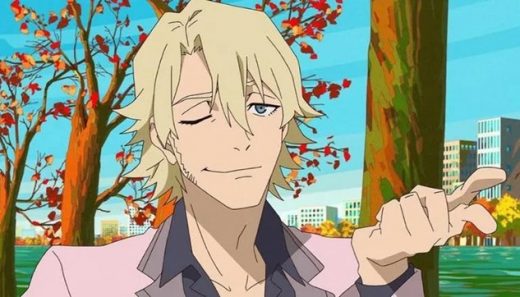 Before leaving Yutaka Yamada, another of his soundtracks and a much more recent one must be included on this best anime soundtracks on Spotify list, because it really is superb.

That is the Great Pretender soundtrack. A soundtrack from an anime that, I have to admit, is the only one on this list I have not yet watched.

But…the music on its soundtrack grabbed me so much, the anime is also now next on my list.

That’s because it is rare to find an anime soundtrack featuring not only a number of jazz tracks, but superb jazz music. Something also astounding, considering Yamada doesn’t normally compose jazz.

If you love a good anime soundtrack that also hits that jazz spot, the Great Pretender soundtrack will push all your buttons. 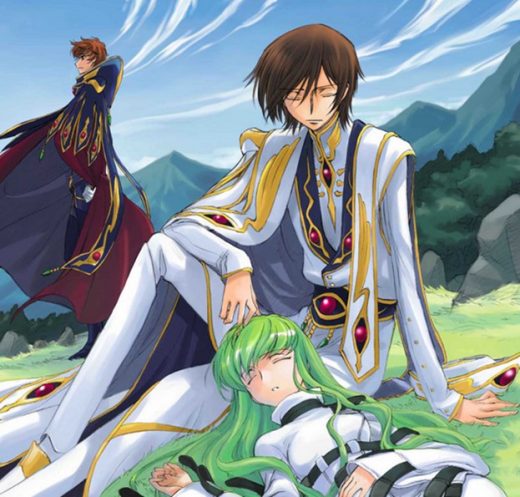 One of my favorite anime soundtracks of all time, the Code Geass: Lelouch of the Rebellion R2 soundtrack surprised me when it showed up on Spotify, as it is heading towards 15 years since the anime was first released.

For a flashback to one of the best sci-fi action anime series released, this lovely soundtrack will definitely bring back memories. 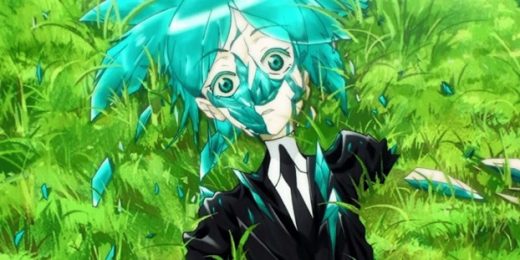 Land of the Lustrous soundtrack

This features one of my favorite pieces of anime music ever released — ‘Cinnabar‘ — the 15th track on the album, the music named for my favorite character from the anime, and one that with its heart-wrenching violins accompanied by the mournful tones of an ehru just breaks my heart.

This 48-track anime soundtrack album has so many gems on it, I would have to list almost every track.

But do specifically listen to the more upbeat 13th track ‘Sea‘, the instrumental version of ‘Waves in the Mirror‘ (track 22 on the second disc) and, of course, the Land of the Lustrous main theme — the first track on the album.

The Land of the Lustrous soundtrack was composed by Yoshiaki Fjuisawa, Keiko Shiga and Yoshimasa Teru.

It is one of the most beautiful anime soundtracks of recent years, I believe, because of its use of both western and traditional Chinese and Japanese instruments, and of its more Japanese-sounding music style.