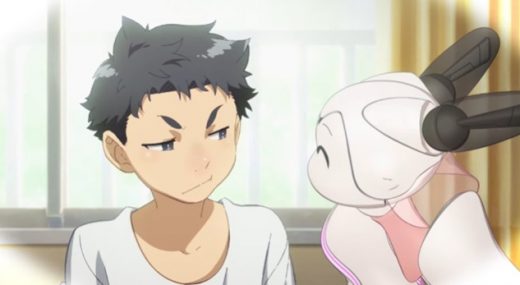 The new sci-fi anime film Break of Dawn (aka Bokura no Yoake) got a new trailer and key visual today as the production committee promotes its upcoming October 21st premiere in Japan.

The Break of Dawn trailer features the movie’s theme song ‘Itsushika‘, which is performed by Daichi Miura.


It also shows Yūma and his friends, as they meet extra-terrestrial being Nigatsu no Reimei-gou, and head off on an adventure to uncover a secret that has been hidden on Earth for millions of years.

The upcoming Break of Dawn anime is based on the manga series by Tetsuya Imai. It is directed by Tomoyuki Kurokawa (episode director of Psycho-Pass 3) in his first full-length film directorial debut.

The screenplay was written by Dai Satou (Words Bubble Up Like Soda Pop), with character designs by Takahiko Yoshida (Cells at Work!) based on pomodorosa’s original designs.

ZERO-G is in charge of anime production.

Kodansha has licensed the manga for English publication, which will occur sometime in Spring, 2023. They have this to say about the Break of Dawn plot:

It’s the year 2038, but more importantly, it’s summer. A little boy named Yūma is obsessed with the impending return of the Arville Comet. One day, he sneaks onto the roof of an apartment building and finds something even more amazing—something not from this world.

Now Yūma and his friends, and his hovering autopet Nanako, must work together to uncover a secret that’s slumbered in the Earth for years, as dawn breaks over a new era for him and for humanity.

Watch the just released new Break of Dawn trailer below, and do notice its gorgeous art style.

A style that, for me, means it will be an easy must watch when it releases.