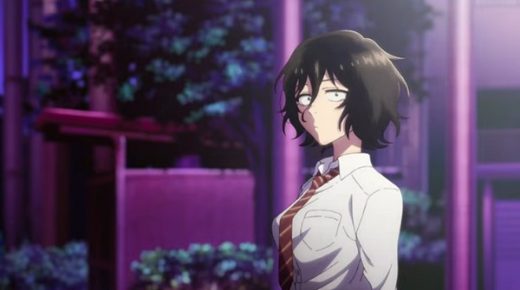 A new Call of the Night key visual featuring Akira Asai  has been released today via the upcoming anime’s official Twitter account.

Akira is Ko Yamori’s childhood friend, and a girl who also lives in the same apartment complex as him.


The latest Call of the Night visual has Akira Asai in a park, alone on a swing, as it is beginning to go dark.

Along with the visual, the anime also released a short teaser trailer, with Akira being voiced by actress Yumiri Hanamori (Nadeshiko in Laid-Back Camp).

Call of the Night is based on the popular manga series Yofukashi no Uta by Kotoyama.

It tells the story of teenager Ko Yamori (Gen Sato) who, as he becomes more and more of an insomniac, stops going to school and instead begins to spend his time walking the streets at night.

It is there he meets Nazuna Nanakusa (played by Sora Amamiya), a vampire who shows Yamori what it is like to live in her world.

Tomoyuki Itamura (The Case Study of Vanitas) is directing the anime, with Michiko Yokote (Tribe Nine) as screenwriter, and Haruka Sagawa (Child of Kamiari Month) as character designer.

LIDEN FILMS is in charge of anime production.

RELATED: The Call of the Night character designs are so cool — check out how amazing Nazuna looks

Call of the Night is set to premiere in July in Japan.