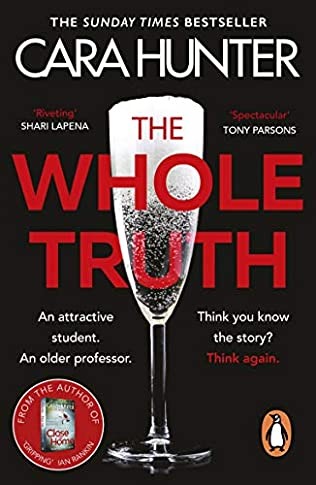 The book is the fifth in Hunter’s DI Adam Fawley series, and follows on from All The Rage, which was released in December, 2019.

Like Cara Hunter’s other books in the series, the story takes place in Oxford, England — the city where she earned her PhD and where she still lives today.

It again features Detective Inspector Adam Fawley, a police officer based at the St Aldate’s police station in the center of town, and someone who truly cares about the people in the community he serves.

In The Whole Truth, however, Fawley may find himself in quite a bit of trouble.

Especially when what might first sound like that age old story of a young university student and an older professor turns out to be anything but usual.

Especially when all the twists kick in. (continue reading after the promo…)

The plot of Cara Hunter’s The Whole Truth

According to her publisher Penguin Random House, the plot of Cara Hunter’s The Whole Truth goes a little like this:

When an Oxford student accuses one of the university’s professors of sexual assault, DI Adam Fawley’s team think they’ve heard it all before. But they couldn’t be more wrong.

Because this time, the predator is a woman and the shining star of the department, and the student a six-foot male rugby player.

Soon DI Fawley and his team are up against the clock to figure out the truth. What they don’t realize is that someone is watching.

Cara Hunter’s The Whole Truth will be published on March 18th, 2021 in paperback, audio and on Kindle. You can pre-order the book now on all the usual platforms.