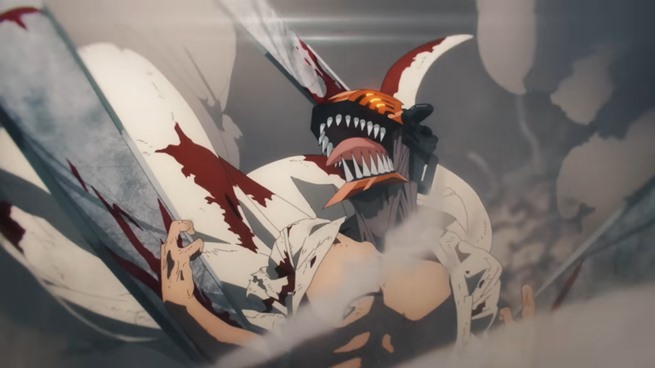 Of course, Chainsaw Man‘s Denji’s character video is the last one of MAPPA’s collection of character trailers to release, with his video coming out earlier today around the same time the season finale of Season 1 of the anime aired in Japan.

And, as you might expect, Denji’s character video is all action all of the time as he goes from a kid living in a hovel and surviving on cheap slices of bread with Pochita his devil companion by his side, to a Public Safety Devil Hunter with a now-Pochita heart annihilating half the devils he comes across.

Much of Denji’s character video, though, is taken up with showing off his amazing fighting skills.


From powerful runs across the body of the Leech Devil after having already had his hand chopped off, to chainsawing a hundred zombies and, right at the end, dropping in from the sky on top of Katana Man.

A fight that, if you have already watched Episode 12 of the anime, you will know he eventually wins.

Sure, Denji may not always be the brightest bulb in the box, but he not only has all the right moves, he is incredibly smart when it comes to figuring out a way to come out on top.

Even if it sometimes looks like the craziest thing you have ever seen.

Watch Denji’s character video and, by the way, do take note that this is voice actor Kikunosuke Toya’s first major role and, hell, does he kick some ass in it, eh?

You can watch every episode of Chainsaw Man Season 1 on Crunchyroll now.

RELATED: Chainsaw Man Ending 12 shows Aki, Power and Denji as the strange family they are, and it’s lovely