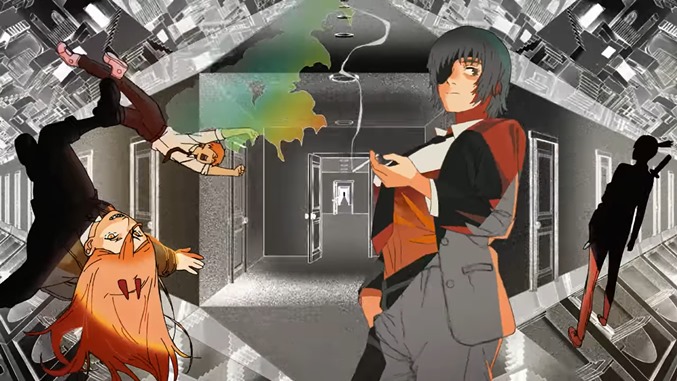 Japanese anime studio MAPPA has released the non-credit ending animation for the currently airing episode of the Chainsaw Man anime, which also features the ending theme for Chainsaw Man, Episode 5 ‘In the Backroom’ by Syudou.

An ending animation segment that is wild and incredibly bizarre, stocked full of optical illusions, and graphics of things that are always in the wrong space and time.


Syudou’s ‘In the Backroom‘ is one of 12 original ending theme’s for the dark fantasy anime.

The four other themes released so far are:

with the just released ‘In the Backroom’ by Syudou, we have now heard five of the twelve.

Chainsaw Man is based on the manga series, which was written and illustrated by Tatsuki Fujimoto (Fire Punch).

It tells the story of Denji, a teenage boy who lives with Pochita, a Chainsaw Devil. One day, Denji is killed by the yakuza due to a debt his deceased father owes, but is resurrected by Pochita. Unfortunately, he must now live his life as ‘Chainsaw Man’. A hybrid of a human and a devil.

Watch the just released non-credit ending animation for Chainsaw Man, Episode 5, then listen to the song again on Spotify. It’s a banger.

Something Chainsaw Man fans must agree with, as the animation has had almost 310,000 views in just the three hours since it was released.