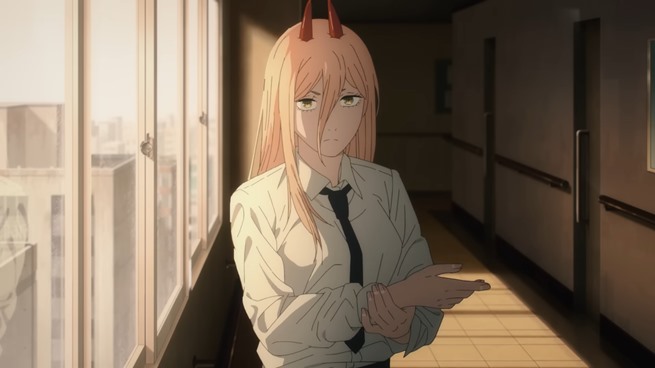 Apparently my prediction powers are on point as, just like I expected yesterday, Chainsaw Man‘s Power character video is the next one in that anime’s character videos to be released today.

Well, along with a character video for Makima as well.


Chainsaw Man‘s Power character video is one of a collection of videos MAPPA is releasing daily in anticipation of the anime’s finale next week.

It features the crazy but adorable devil right from when she first appears in Makima’s office, as Denji is being welcomed into the Public Safety Devil Hunters organization.

The 55-second video also includes scenes from when the annoying devil moves into Aki’s apartment to live with Aki and Denji, and even when she lets Denji grope her boobs.

And, of course, it wouldn’t be a Power character video if we didn’t see the amazingly powerful devil heading in to annihilate other devils by dropping from an enormous height while yielding a heavy blood hammer.

Watch Chainsaw Man‘s Power character video down below, and mark your calendars for Tuesday, December 27th, as that is when the final episode of the first season of the popular anime will air.

Notice too just how talented a voice actress Ai Farouz is, as from just the many fabulously gutteral screams Power emits in this short video alone, you can only imagine how much her voice must have hurt when she was done recording each episode.

Chainsaw Man is currently streaming via Crunchyroll, so if you haven’t caught up yet now is the time before the finale hits.