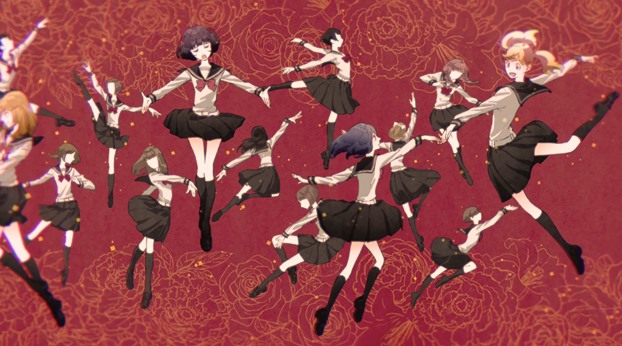 A clean Kageki Shojo!! ending animation has just been released, and it cements in my mind yet again what a fabulous cute girls doing cute things show this is so far.

The TV anime centers around a group of girls who join an all-female theater troupe at the Kouka School of Musical and Theatrical Arts, and then show off their acting skills by playing both female and male parts.

The Kageki Shojo!! anime is based on Kumiko Saiki’s manga, and is directed by Kazuhiro Yoneda, with animation production by Pine Jam.

The clean Kageki Shojo!! ending also shows off the ending theme song — ‘Hoshi no Tabibito‘ (aka ‘Travelers of the Stars‘) by Sarasa Watanabe and Ai Narata.

Both girls, of course, are Kageki Shojo!! characters played by Sayaka Senbongi ((The Demon Girl Next Door)) and Yumiri Hanamori (Shadows House) respectively.

Kageki Shojo!! is currently being streamed on Funimation in the west, with just two episodes released so far.

Watch the clean Kageki Shojo!! ending animation below, then be sure to add the anime series to your watch list as it is excellent so far.

Listen to the show’s opening theme on Leo Sigh.