Sometimes I come across an anime theme song I cannot stop listening to.

Such is the case this week when I stumbled across Kashitaro Ito’s ‘Pearl Gray Revolution‘ (aka ‘Shinjuiro no Kakumei‘), the ending theme song for the new anime series Deep Insanity The Lost Child.

The song itself is as catchy as hell, with a melody that just wraps its way around your memory and has you singing along to it long after the video ends, and Kashitaro Ito’s vocals are gorgeous (don’t you love that strange vibrato he has to his voice, that just adds a whole other depth to every song he sings?).

Kashitaro Ito’s ‘Pearl Gray Revolution‘ is unfortunate that it also happens to be the Deep Insanity: The Lost Child ending theme.

An anime series most people seem to have taken a complete dislike to (it currently has an abysmally low 5.25 rating on My Anime List), so the song is pretty much being ignored.

And it shouldn’t be. 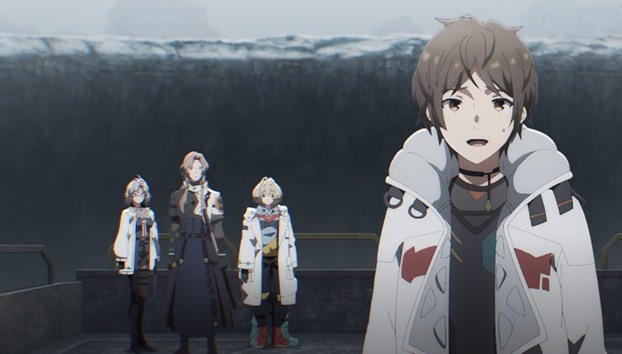 Now, I hadn’t watched the first two episodes of Deep Insanity: The Lost Child yet, as I have so many anime on my list to get through.

But I did once ‘Pearl Gray Revolution‘ burrowed its way into my brain and, frankly, it is nowhere near as bad as people are saying it is.

Sure, the CGI of the monsters is horrible (the fish thing in the first episode is laughable), and the characters are not fully developed — at least yet.

But the anime does have an interesting premise — mass comas worldwide are happening due to an illness called ‘Randolph Syndrome’, and the cause seems to be monsters that have appeared after a gigantic hole in the South Pole opened up — so it may develop into something cool.

After all, I have already discovered a hella good anime ending theme in Kashitaro Ito’s ‘Pearl Gray Revolution‘ and, who knows, Deep Insanity: The Lost Child may still have other treasures to offer.

Watch the music video for Kashitaro Ito’s ‘Pearl Gray Revolution‘ below, and then tell me that song isn’t one of the catchiest, most addictive anime theme songs you have heard in a while!

Deep Insanity: The Lost Child is currently streaming on Funimation. Come on, give it a few more episodes before you make up your mind. I know I will.