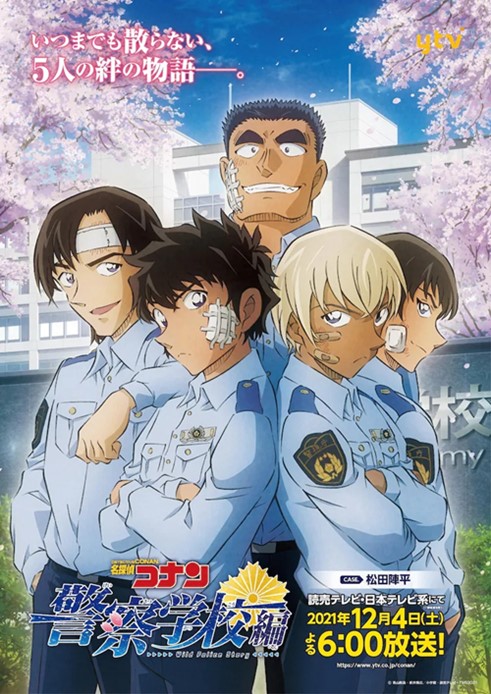 The Detective Conan: Police Academy Arc – Wild Police Story anime is scheduled to premiere in December, and the anime production committee is gearing up to promote it.

Not that they probably have to do too much of that, as the Detective Conan: Police Academy Arc – Wild Police Story manga the anime is based on was one of the best-selling manga in Japan late last year. (Known as Meitantei Conan: Keisatsu Gakkou-hen – Wild Police Story in Japan).

But, releasing a Detective Conan: Police Academy Arc – Wild Police Story key visual is something they have done this week anyway.

A much welcome and very cute key visual, as it features all five of the main characters — Rei, Jinpei, Wataru, Kenji and Hiromitsu — looking ready for action, even if they are a bit beaten up.

The upcoming anime series is a spin-off of the main series, beginning seven years before the events of Meitantei Conan.

Along with the new Detective Conan: Police Academy Arc – Wild Police Story key visual, the main cast members were also announced. They are:

All of the cast members are the returning cast from the Detective Conan TV series, except for Hiroki Touchi, who takes the place of the phenomenal Keji Fujiwara, who sadly died of cancer early last year at the age of just 55.