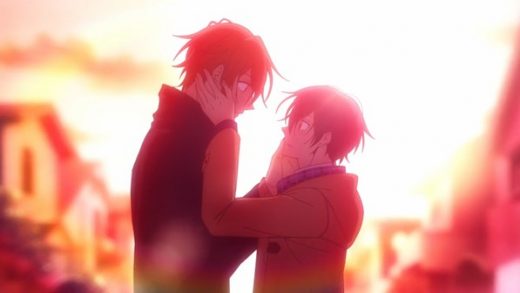 With the first season of Sasaki and Miyano now ended (and another season hopefully on the way), fans who haven’t yet watched the whole show probably want to know the answer to one question.

Do Sasaki and Miyano tell their families they are going out?


After all in Volume 6 of the manga, Miyano has finally confessed to Sasaki and, by the end of Episode 12 of the Sasaki and Miyano anime series, most of the boys’ friends already know they are dating.

But, in the manga series by Shō Harusono, events are already ahead of the anime series. That means the boys may have already told their families they have a boyfriend, right?

Do Sasaki and Miyano tell their families they are going out, or do they keep the relationship a secret?

As Sasaki is an upfront and honest person, it would seem obvious he has told his family that Miyano is his boyfriend.

Miyano, however, is more private about his feelings, so his family may not yet know.

Is this true, though, or does the Shō Harusono-written manga series have a different outcome?

Yes, Sasaki has told his sister that Miyano is his boyfriend.

This occurs in the Sasaki and Miyano manga Volume 7, which is currently only available in Japanese. when Sasaki gets sick and Miyano comes to visit him.

The next time Miyano is at Sasaki’s house, his sister walks into Sasaki’s room, sees her brother’s ‘kouhai’ and thanks him for coming to see her brother when he was sick.

But Sasaki tells her, “He’s not my kouhai. He’s my boyfriend”.

After initially looking shocked, Sasaki’s sister bolts. It is then left to both boys to go after her (she has gone to her boyfriend’s house) but, after Miyano has a talk with her, she apologizes for her behavior and tells him she will be supportive of their relationship.

Miyano responds by saying “Well, don’t keep telling Sasaki you’re ‘worried’ about our relationship, as he might think there’s something to be worried about. Instead, just treat it as something ‘normal’.”

As for Miyano and his family…

Meanwhile, and surprisingly, Miyano has also told his mother he and Sasaki are going out.

This happens when Miyano asks her if he can bring someone home with him to make chocolates on Valentine’s Day.

After she has made fun of his terrible cooking skills, Miyano tells her he is bringing another boy home, and she replies she has noticed some boys are now giving chocolates on Valentine’s Day. (In Japan, girls usually give chocolates to a boy on Valentine’s Day, and boys respond a month later on White Day).

Miyano then stutters “Well, actually, I’ll be giving my chocolates to another boy”.

His mother calmly replies, “Oh I see. Well, then let me meet him sometime”.

Still flustered, Miyano tells her he wants to “stay with this Sempai in the future, as I love him”, leaving his lovely mother to say “Being in love is nice, isn’t it?

Then, when she finds out the boy Miyano loves is the same boy who will be coming over to make chocolates, she tells Miyano to invite him for dinner.

You can pick up the Sasaki and Miyano manga series in English via Yen Press. Volume 5 will be out on April 26th, 2022, so it will probably be 2023 before Volum 7 is available. Damn.