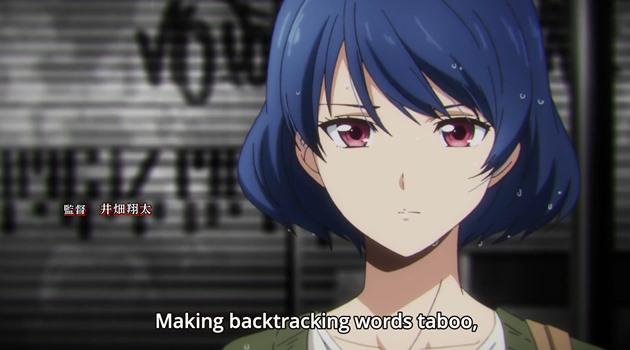 Called ‘Kawaki wo Ameku” (aka ‘Crying for Rain‘ or カワキヲアメク) and performed by Minami, it is one of those rare Japanese anime opening theme songs that is massively powerful and has an utterly addictive chorus and melody.

And that is why ‘Kawaki wo Ameku‘ by Minami is being added to our list of Best Anime Songs.

Because the song’s opening begins as if it will be another typical anime theme song — with its soft guitar intro and the lyrics “Inexperienced, heartless, but even so” but then as the subsequent lyrics “be beautiful” appear, Minami’s voice morphs into a loud angry wail.

A wail that is followed by a pounding piano and then continues to develop until ‘Kawaki wo Ameku‘ turns into one of the coolest Japanese pop rock songs ever to grace an anime.

And, holy hell, that massive chorus!:

“Enough. Even if you say to do this or that,

Even if you say love me, or why?

And that it’s reckless, serious negotiating

How many times are those worn out unexpectedly

serious words going to be used?”

And, while the Domestic Girlfriend opening animation with its shots of running girls and driving rain is cool in its own right, Minami herself has a full ‘Kawaki wo Ameku‘ music video that has a similar theme.

This one, though, is even more powerful due to the song’s length being complete and the vibrant colors of the video’s animated artwork.

That video, by the way, is so loved by Minami and Domestic Girlfriend fans, it currently has over 151 million views on YouTube.

Watch both the Domestic Girlfriend opening animation with the shortened version of ‘Kawaki wo Ameku‘, and the official music video for Minami’s fabulous song, below to see just why I think this track is phenomenal.

You can also check out all the other songs currently on Leo Sigh’s Best Anime Songs list to hear what other gems we love, and then subscribe to Minami’s YouTube channel if you love what she does as much as we do.