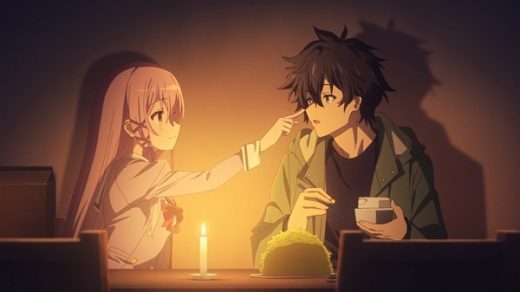 The upcoming original anime Engage Kiss just got its first trailer and a new key visual, and it seems the show most people thought would be a relaxing romantic comedy, slice-of-life could be anything but.

After all, when a demon shows up in the Engage Kiss trailer, and everyone is suddenly shooting guns, this romantic comedy might have a lot more action to it than we expected.


Not that I’m complaining, you understand.

The new Engage Kiss trailer features small business owner Shuu, a guy who spends most of the money he earns, causing him to live a pretty depressing life.

Shuu’s friend and potential romantic interest, Kisara, is concerned about him. So she keeps showing up to make sure he is not in too much trouble, while his ex-girlfriend Ayano also has her concerns.

But, with a demon seemingly on the lose on the island state they all live on, things are set to get pretty fast-paced pretty fast. And money might soon be the last of Shuu’s concerns.

She might look ‘religious’ but, chances are, there is a lot more to her than just that as well.

Engage Kiss is being directed by Tomoya Tanaka (Visual Prison), Fumiaki Maruto (Miru Tights) is in charge of series composition, with Date a Live illustrator Tsunako designing the characters.

A1 Pictures is in charge of anime production.

According to the new trailer, the first episode of Engage Kiss will premiere on July 2nd in Japan.

Get more information about the anime on its official website.

And yep, this one looks like a fun one!