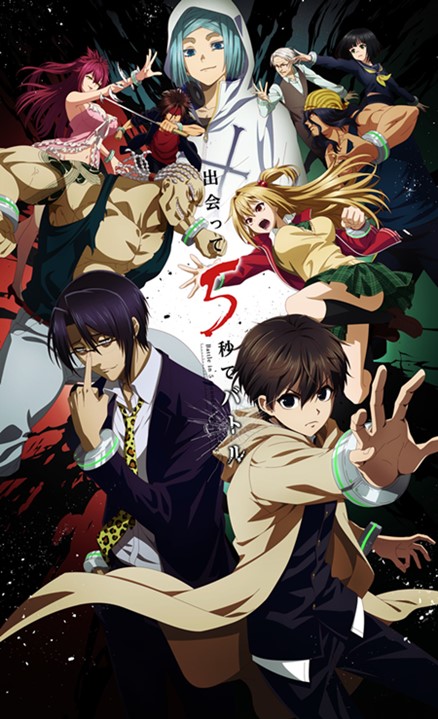 The official website of one of my favorite anime this season — Battle Game in 5 Seconds (aka Deatte 5-byou de Battle in Japan) — got a new key visual ahead of Episode 8 this week.

Along with Akira front and center, the visual features all the main cast members bursting with energy, right before they head out for the next big battle.

Battle Game in 5 Seconds has been one of the big successes of the current anime season, with fans raving about its animation and artwork, the show’s well-written dialogue, the involved, interesting plot and, of course, the cool characters.

The anime’s voice actors are also being praised.

It was just a usual morning.

Akira Shiroyanagi, a high schooler who loves games and Konpeito (Japanese sweets), has suddenly been dragged into a battlefield by a mysterious girl who calls herself Mion. The participants are told that they are “erased from the family register, involved in an experiment, and gained certain powers.”

Akira is determined to win the game with his newfound powers and destroy the organization. Armed with a power no one expects and his “brain” skills, the new period of intelligence battle begins!

Check out the new and very cool BattleGame in 5 Seconds key visual above, and watch Episode 8 of the show right after it airs in Japan on Crunchyroll.

If you haven’t yet started watching the anime, and you should if you enjoy a good supernatural/action series, the show’s trailer will pull you in and grab you.