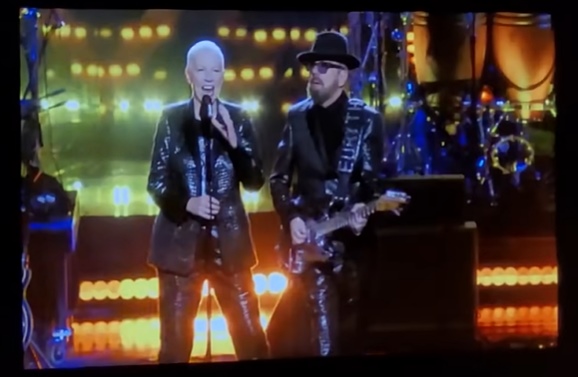 Well, this doesn’t happen every day.


Yep, the new wave/synth pop duo was inducted into the Rock & Roll Hall of Fame last night (finally!), and took that opportunity for Annie Lennox and Dave Stewart to get back together for the night.

Annie Lennox and Dave Stewart have disbanded several times since Eurythmics was first formed in 1980 but, at some point, they always seem to come back together for just one more performance.

Their most recent one was back in June, when they were inducted into the Songwriters Hall of Fame. Yesterday, it was the Rock & Roll Hall of Fame’s turn.

Eurythmics perform Would I Lie to You’, ‘Missionary Man’ and ‘Sweet Dreams’ at Rock & Roll Hall of Fame

Last night’s Eurythmics three-song live performance featured some of the duo’s biggest hits — ‘Would I Lie to You’, ‘Missionary Man‘ and, probably their most iconic song yet, ‘Sweet Dreams (Are Made of This)’.

All three songs were performed at the pair’s usual high-energy, with Annie Lennox’ incredible voice seemingly none the worse for wear. Even though she will be 68-years-old in December.

Dave Stewart too played the guitar like the Grammy Award-winning musician he has been for years.

Other musicians inducted into the Rock & Roll Hall of Fame last night along with Eurythmics were Duran Duran, Dolly Parton (amazing it has taken this long, eh?), Judas Priest and Eminem.

The entire concert, featuring live performances from the other inductees too, will air on HBO on November 19th.

Until then, watch the almost-eight-minute, three-set live performance Eurythmics gave at the Rock & Roll Hall of Fame induction last night in the video below. You have got to admit, it was pretty damned stellar.