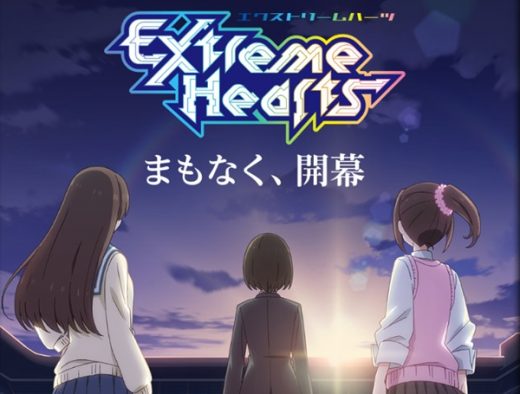 A fourth Extreme Hearts key visual has just been released as a promotion for the upcoming original anime, and it’s beautiful and more than a little bit mysterious. (see below)


The visual is drawn so the only thing you can see is the characters from behind, and not their faces.

The Extreme Hearts anime has been written by Masaki Tsuzuki (Dog Days), and follows a group of girls living in the future who participate in a series of games called ‘Hyper Sports’.

When their participation begins, the three meet each other for the first time, and soon become firm friends.

The three main voice actors have also been announced today.

They are — Ruriko Noguchi (Sally in BOFURI: I Don’t Want to Get Hurt, so I’ll Max Out My Defense) who is voicing Hiyori Hayama, Miho Okasaki (Rimuru in That Time I Got Reincarnated as a Slime) who plays Saki Kodaka and Kana Yuuki (Noelle in Black Clover) as Sumika Maehara.

The Extreme Hearts anime is set to premiere in Summer, 2022.