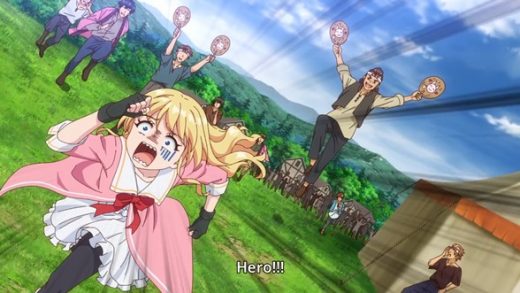 Fantasy Bishoujo Juniku Ojisan to Episode 10 is the first weak episode in the series, with a plot that isn’t compelling, a dull story that was all over the place and, for me at least, with no laughs and only one smile throughout.

Fantasy Bishoujo Juniku Ojisan to (aka Life with an Ordinary Guy Who Reincarnated into a Total Fantasy Knockout) Episode 10 begins with Princess Ugraine seeking the help of the men in the kingdom in her rebellion, with both she and Tachibana wearing provocative outfits and shy smiles.


Thus, encouraging the men to join them through ‘the power of the cute girl’, and being successful. (Watch that scene in the video below).

Sure, I had weak smiles while the two girls behave coquettishly in front of the villagers, but it all seemed contrived, and as if the joke about Tachibana having every man fall in love with her is wearing a tad thin.

Tachibana gets tired of having to wear such a short outfit, however, and runs away, and it’s then we learn Ugraine’s head maid is behind the uprising.

Of course, she isn’t a maid at all, but one of the Demon Lord’s generals, right?

Meanwhile, Tachibana is trying to escape but can’t leave the Princess’s encampment without the gold tiara on her head, or all the men in the village will pursue her.

While looking for it, Tachibana stumbles across Muria, the king’s intelligence agency head, who has been tied up by the head maid.

But, after she screws up untying Muria and makes her bonds tighter, leaving poor Muria suddenly hog-tied and hanging from the ceiling and far worse off than before Tachibana arrived, Tachibana realizes she is useless without Jingujii.

Seeing that she is stressed, the head maid gives Tachibana a massage, but uses the experience to activate the Goddess symbol on the back of Tachibana’s neck, telling her she will use it to make her stronger.

Instead, she uses it to manipulate Tachibana’s memories so she goes back to when she met Jinguuji, as he saved her (or, at that point, ‘him’) from bullies.

But, because the demon is messing with her memories, Tachibana decides she may actually be jealous of Jinguuji.

Even though the reality is more likely that she/he is in love with him. (Yep, I’m still waiting for that big Boys’ Love scene. Sue me!)

Back at the palace, the King calls Schwartz-kun to come and save the kingdom but, as usual, he’s all loud talk but not much action.

But Schwartz promises to help anyway, until main girl Lucius appears and drags him away telling him, as the hero, he should be more careful about what he promises.

After all, he doesn’t want to be dragged into a conspiracy that could turn out badly for him. 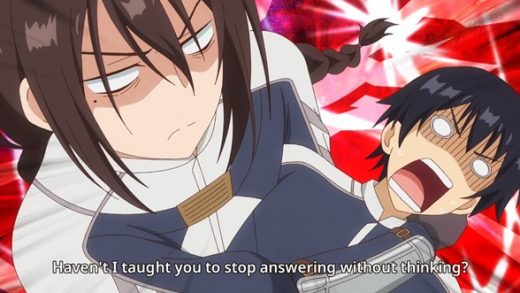 And these few scenes were the few in this episode bordering on the humor of earlier episodes, with the banter between Schwartz and Lucius as good as ever, and with the hint there may be something else going on between the pair other than just ‘master’ and ‘hero’.

We can only wish, eh?

But Schwartz is so happy about wanting to help, Lucius takes him to the battlefield where he finds himself alone facing a mob of angry villagers.

A scene that is quite Monty Python-esque, leading me to wonder if original manga creator Yuu Tsurusaki is a closet Python fan?

As Schwartz hesitates, Lucius tells him to use Gram, his sword, and to control it instead of letting Gram control him.

So he does, slicing off the mob’s clothing and destroying their weapons without hurting anyone. A scene that was even more Monty Python-esque in its silliness.

The mob then decides to leave the battlefield naked, and head back to their homes. Seemingly with their resolve to fight having been cut off by Gram as well.

At the palace again, and Schwartz comes across Jinguuji whois in a terrible mood. Schwartz suggests that could be because Tachibana left with the princess, and Jinguuji is jealous.

That brings today’s story to a full circle, as both Jinguuji and Tachibana are entertaining the green-eyed monster.

Tachibana jealous of Jinguuji due to the head maid’s manipulations, and Jinguuji jealous of the princess who is currently getting Tachibana’s attention.

All in all, Fantasy Bishoujo Juniku Ojisan to Episode 10 is, sadly, a bit of a dud, with weak events and even weaker dialogue.

Especially as much of the episode revolved around Schwartz and Lucius, but with the pair not as funny as usual, and with little attention being paid to the main, and to me, best characters — Tachibana and Jinguuji.

Even the princess disappeared after a few minutes, with the result we didn’t even have a cute girl to put us in a better mood.

As Fantasy Bishoujo Juniku Ojisan to Episode 10 ends, we also aren’t much closer to ending the rebellion or re-uniting Tachibana and Jinguuji.

Never mind light years away from fighting the Demon Lord, and completing the Goddess of Love’s quest.

But with only two more episodes to go of Season 1, that does suggest Season 2 of Fantasy Bishoujo Juniku Ojisan to is likely well underway.

Hopefully, we will get an announcement about that soon after Episode 12 ends.