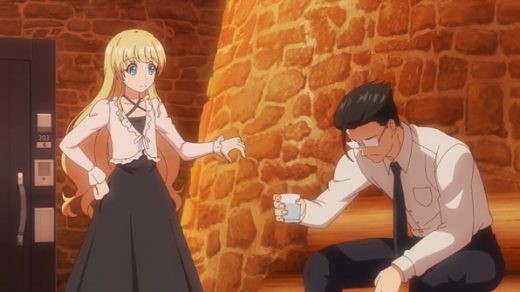 Episode 2 of Fantasy Bishoujo Juniku Ojisan to definitely did not disappoint in any way.

Not with its quite wholesome Boys’ Love romance, which both boys are currently fighting against, and at least a third of the episode being some of the funniest anime in Winter 2022.


So, let’s dive in, because Fantasy Bishoujo Juniku Ojisan to was such a fabulously wonderful surprise when Episode 1 aired, I am beyond thrilled to discover Episode 2 is just as good, if not better.

A quick recap of Fantasy Bishoujo Juniku Ojisan to Episode 2 has Jinguuji and Tachibana figuring out that Jinguuji’s ‘special skill’ bestowed upon him by the goddess is a door that leads into Tachibana’s apartment back in Japan.

A ‘skill’ the goddess sloppily chose after she heard Jinguuji saying his main aim the night the two men went out to the mixer was to get Tachibana back to his apartment.

But… there is food and water in the apartment… well, sort of… and it does give them a place to sleep. 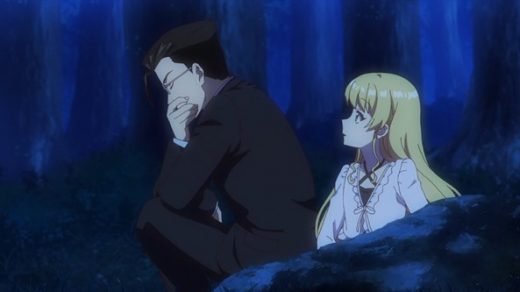 The rest of the episode revolves around a village the two stumble across being overrun by bandits, only for Tachibana to find out her ‘special skill’ is making every man on the planet fall in love with her.

So much so, the bandits are soon fighting among themselves as to who will take her for a wife, making it easy for Jinguuji to tie them up.

The villagers then hail the pair as their saviors, and are even happier when Tachibana and Jinguuji find out where the bandits’ base is so they can head there and kill them off.

But… Jinguuji isn’t counting on Tachibana making every man fall in love with her just by looking at them, including him, and he is soon off on a fantasy in his head about marrying her.

The episode ends with the pair vanquishing the bandits and taking over their loot but, in the process, somehow managing to burn down half of the forest.

That leads to an ending with a new character — a beautiful elf — who wakes up to find the forest she cares for has been devastated with fire.

Guess we’ll find out who she is in Episode 3, eh?

I am so happy to find out Fantasy Bishoujo Juniku Ojisan Episode 2 is just as funny as the first one, as all too often humor in anime tends to disintegrate very fast.

Not here, though, as Episode 2 had more of the delightfully quirky conversations between Tachibana and Jinguuji, as both of them find themselves with feelings about the other they are definitely uncomfortable having.

The worst affected, though, is Jinguuji, who at one point is so besotted with Tachibana he is contemplating what time period is “too soon to marry”, until he snaps himself out of it and throws Tachibana like a bowling ball towards the bandits’ base.

One of the funniest scenes I’ve seen in an isekai anime, as it was so surprisingly unexpected.

It isn’t just the humor that makes Fantasy Bishoujo Juniku Ojisan Episode 2 so wonderful though.

It is also the strong relationship between the two men, which is shown to have been incredibly strong even in high school as we see a flashback of Tachibana helping Jinguuji with a school project even when he didn’t have to.

A relationship that, just two episodes in, and I am already hoping Tachibana and Jinguuji will eventually turn this fantasy isekai anime into a Boys’ Love anime instead.

Because, come on, they’re perfect for each other.

Watch Fantasy Bishoujo Juniku Ojisan Episode 2 via Crunchyroll, and check out Jinguuji throwing poor Tachibana like a bowling ball in the video below.

And thankfully, because I’m a week or two behind this fabulous anime, I can now immediately head off to watch Episode 3.