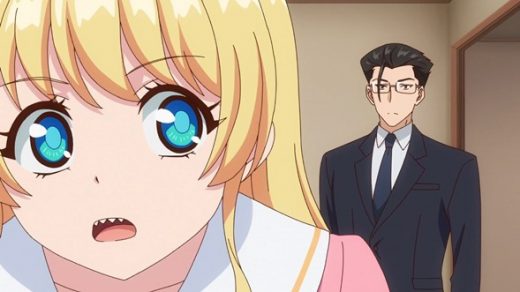 The fantasy isekai anime series Fantasy Bishoujo Juniku Ojisan to just gets better and better, with Episode 3 — “A Guy Who Reincarnated as a Fantasy Knockout and an Angry Elf” — proving to be just as funny and silly as its previous two episodes.


Another crazy character that just made this already hilarious anime even funnier.

You know things probably won’t go well when Jinjuuji tries to sell the pelt of the monster he killed, but it turns out it was a guardian of the forest.

Soon after, three elfs appear, and Jinguuji and Tachibana quickly learn they are royally pissed.

After all, not only was their forest guardian killed, but half of the forest was also burnt down.

This leads to Lou, the elf who is the clan head, demanding restitution but then becoming threatened by Tachibana’s beauty and demanding the villagers vote on who is the “most beautiful”. Her or Tachibana.

Of course, she doesn’t know Tachibana has the ability to mesmerize everyone, so Tachibana wins the beauty competition without even trying.

Lou then responds to losing the competition by trying to kill both Jinguuji and Tachibana, with the pair being forced to escape in the forest.

Jinguuji gets revenge by firing a stone at Lou, which cuts off her ponytail leaving her devastated at its loss.

Related: Love the scene in Fantasy Bishoujo Juniku Ojisan to when Jinguuji throws Tachibana like a bowling ball

Fantasy Bishoujo Juniku Ojisan to Episode 3 ends with Jinguuji cooking dinner with the guardian’s meat, and the pair drinking beer that Tachibana has found in her apartment.

But, of course, Tachibana forgets she now has a tiny body and quickly becomes drunk, causing her to rush off into the forest where she is captured by a man-eating plant.

Jinguuji saves her, although he struggles before he does as he becomes incapacitated by Tachibana’s ‘charm’ again.

The last scene of the episode shows Lou stumbling on the pair’s dinner table and helping herself to the tasty meat sitting there. Not realizing it is the forest guardian’s meat she is consuming.

A couple of minutes later, and she too is then dragged into the forest by a man-eating plant.

Poor Lou — nothing good will come of getting involved with Jinguuji and Tachibana. Obviously.

Especially when Tachibana is dropped on her head as Jinguuji kills the man-eating plant, and is consequently “leveled up”, leading to Jinguuji telling her “Congratulations”.

The introduction of Lou too is an utter delight, as she is just as feisty and nuts as Tachibana, and equally as cute.

What made this episode brilliant though was Lou getting her guardian murdered then hung up to be dried out and sold, her forest burnt down, losing a beauty competition, having her plait chopped off, then inadvertently eating her guardian’s meat.

Before, of course, she’s dragged off into the forest by the plant to become ‘meat’ herself.

If I wasn’t laughing so hard, I would have felt sorry for her.

Honestly, though, so far Fantasy Bishoujo Juniku Ojisan to is the funniest anime I’ve seen since KonoSuba.

This week’s episode even had the same vibe, as flashback’s of Aqua being eaten by the giant frog made me laugh even harder at Tachibana’s plant predicament.

The sweetest scene of the whole episode, however, was when Jinguuji is helping Tachibana home after she’s almost been devoured by a plant, and Tachibana asks him “What do you think defines gender — the body or the mind?”

And, this time, the question is dealt with seriously as Jinguuji responds “I think it’s fine whichever one you think it is”.

Watch Episode 3 of Fantasy Bishoujo Juniku Ojisan to on Crunchyroll.  And yes, it is still the funniest anime of Winter 2022.