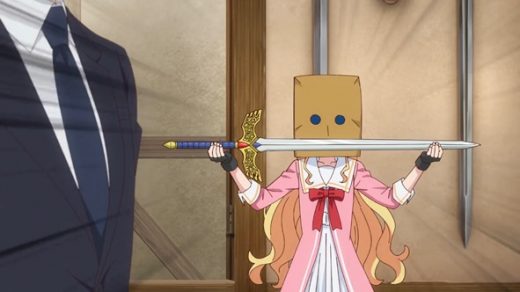 Fantasy Bishoujo Juniku Ojisan to Episode 4 is not as funny as the first three episodes of this new isekai anime series, but I loved it just the same.

That’s because the two main characters — Tachibana and Jinguuji — carry this anime so well and, in every new episode are being developed to the point, as you learn more about them and their interactions with each other, you love them even more.


So let’s take a look at Fantasy Bishoujo Juniku Ojisan to Episode 4. An episode that definitely had its funny moments, but also taught us even more about Tachibana and Jinguuji. 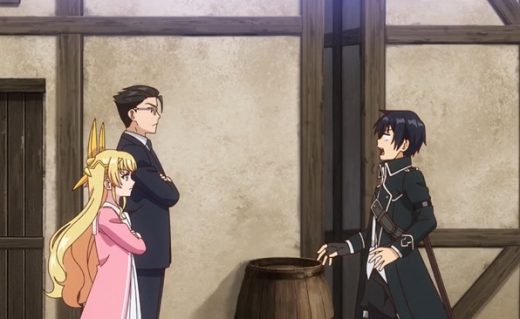 Episode 4 of this superb isekai anime series has Tachibana and Jinguuji in a new town, with Jinguuji forcing Tachibana to walk around with a paper bag on her head so nobody can become obsessed with her.

The problem is solved, however, when the owner of a weapons store sells them a hair ornament Tachibana can wear that will make her less noticeable to most people.

On their way through town after the purchase, they are attacked by two of the bandits they met before, but are saved when a ‘dark swordsman’ prevents the attack. A swordsman who Jinguuji quickly realizes is also from Japan, and has been summoned by the goddess to be a hero, just like happened to our favorite pair.

The man, named Schwartz, isn’t affected by the hair ornament, falls in love with Tachibana and prepares to attack Jinguuji so he can take her from him. But, as he does so, he causes damage to a nearby building and is arrested by the town’s militia.

At the militia headquarters, he tells the officer he is a hero summoned by the goddess and shows her a tattoo on his hand that the goddess gave him.

Tachibana then asks Jinguuji if she has one too, and shows of her neck where he sees the same tattoo Schwartz has on his hand.

As the officer is accusing Schwartz of stealing the tattoo, which she calls the goddesses seal, Lord Mercus arives and tells Schwartz he can prove he is a hero summoned by the goddess by heading out on a mission.

The laughs in Fantasy Bishoujo Juniku Ojisan to Episode 4 are in the first half when Tachibana is being forced to wear a paper bag over her head, and then tries to ‘charm’ Jinguuji into buying her a sword by taking the bag off.

Jinguuji is proud of himself that he doesn’t succumb to her charms although, of course, it was very very close.

Their introduction to Schwartz also has its moments. Particularly when Schwartz is trying hard to impress while Tachibana and Jinguuji have already had enough, and are walking away, and when Schwartz becomes infatuated with Tachibana.

But this episode is interesting for more than just the laughs, as the relationship between the two main characters continues to strengthen and as we get to see their true dynamic at play.

Particularly as Tachibana seems to be growing more feminine every day, and Jinguuji is now admitting he really has zero interest in women.

The interactions between the two are fascinating as well, as both characters’ personalities play off each other so well, with Tachibana supposed to be the one that gets the most laughs, but with Jinguuji’s droll sense of humor getting more than his fair share.

You can tell these two care about each other immensely as well, even if so much of that caring is shown by them sniping at each other or otherwise making fun.

After all, when push comes to shove, if its Jinguuji saving Tachibana or Tachibana proving she does care what her friend thinks of her, it all just goes to show the strong relationship the pair have that cause them to always put the other one first.

Watch Fantasy Bishoujo Juniku Ojisan to Episode 4 on Crunchyroll, and check out the funny snippet from the episode in the video below.