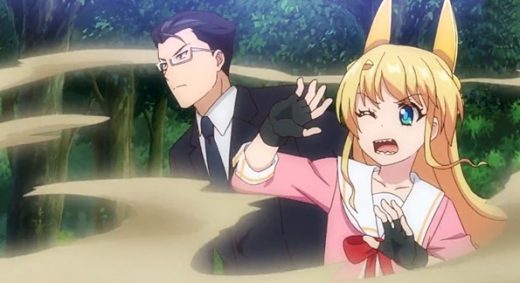 We left Jinguuji and Tachibana in Episode 4 of Fantasy Bishoujo Juniku Ojisan to at the militia’s offices with Schwarz being told he must set off on a mission to prove he is a hero.

At the beginning of Episode 5, however, Jinguuji and Tachibana discover they must also go on the mission with him. A mission to find a ‘living armor’, so it can be destroyed.


On the road with the militia’s head interrogator, Lucius, they learn the living armor doesn’t kill people, it just strips them naked. Something Tachibana isn’t happy to hear at all.

When the living armor does appear it introduces itself as Vizzd, one of the Demon Lord’s officers.

It then quickly strips Schwarz naked, after he tries to fight it but fails, then eats both his clothes and Gram, the sword given to him by his goddess.

Soon Lucius also has her jacket and shirt ripped off, leaving Tachiban to cover her with her jacket. 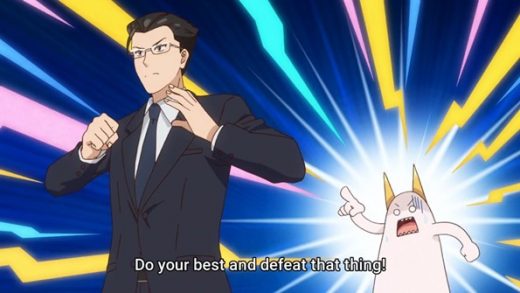 But, as the armor goes after Tachibana, this makes Jinguuji see red and he quickly destroys the armor only to discover Vizzd inside of it.

Not a mighty demon warrior like you might expect though, but instead just an obnoxious, now-crying loli.

Vizzd is taken back to militia headquarters where she is interrogated, but is soon rescued by Kalm, another demon officer who helps her escape from prison.

Kalm then decides she thinks Jinguuji is the hero.

Related: Episode 4 of Fantasy Bishoujo Juniku Ojisan to has Tachibana using her feminine wiles to get Jinguuji to buy her a sword

The episode ends with Tachibana showing Schwarts how to read his stats and, as he experiments with them, an enormous purple portal begins to descend upon them from the sky.

What the hell, eh? 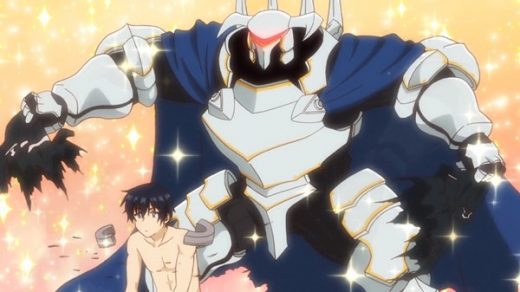 Episode 5 of Fantasy Bishoujo Juniku Ojisan to was one of the sillier episodes so far, but certainly no less hilarious.

The introduction of Lucius was fun, especially because she’s a hard-ass, and Schwarz (aka Schwa-kun) continues to be intriguing. Particularly when it turns out he has a Japanese name he is embarrassed for anyone to see.

In this episode too, Schwa-kun, who is so not a hero, ends up just hanging around waiting for the fight to be over. Completely naked, of course.

At one point, he is even carried around naked tucked under Jinguuji’s arm, which made me laugh so hard I couldn’t breathe.

Vizzd too is interesting, considering she’s a loli who only has any power if she is inside a suit of living armor.

She also seems to be one of the Demon Lord’s favorites, which could lead to more silly situations later on in the season.

The funniest scene in Fantasy Bishoujo Juniku Ojisan to Episode 5, though, is when Jinguuji realizes Tachibana wearing a ‘boyfriend shirt’ is a massive turn-on for him. Just like it is for virgin high school students with no experience with women.

So much of a turn-on is it for Jinguuji, the ‘charm’ he experiences every time Tachibana does something to attract his attention is now skyrocketing off the charts.

That leads him to lash out at Tachibana for his/her preferences of “bunny girls and maid outfits”, which, of course makes Jinguuji so angry he is now easily able to destroy Vizzd.

The scene where the pair are arguing about Tachibana’s preferences, while completely ignoring the living armor attacking Jinguuji, is comedy gold.

All in all, Episode 5 of Fantasy Bishoujo Juniku Ojisan to is another stellar episode with brilliant writing, superb comedy, fabulously quirky and weird characters, and a hugely imaginative story.

Watch the first five episodes of Fantasy Bishoujo Juniku Ojisan to now on Crunchyroll, and you’ll see exactly what I mean.

And do check out the ‘boyfriend shirt’ sequence in the Crunchyroll video — it is the funniest thing.