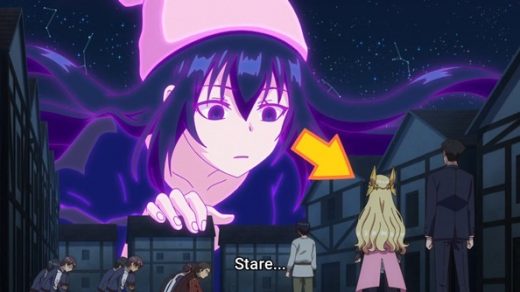 Fantasy Bishoujo Juniku Ojisan to Episode 6 recap, “A Guy Who Reincarnated as a Fantasy Knockout and a Free Spirit“

The sixth episode of Fantasy Bishoujo Juniku Ojisan to (aka Life with an Ordinary Guy who Reincarnated into a Total Fantasy Knockout) kicks off with the enormous Goddess of Night coming out of the sky portal Schwarz summoned at the end of the last episode.

Shwarz apologizes to the Goddess for summoning her by mistake, but the Goddess is far more interested in Tachibana, as she realizes she is the hero brought to this fantasy world by the Goddess of Love.


Jinguuji then tells Tachibana he has figured out that, while Schwarz has the sword for his weapon, Jinguuji himself is her weapon.

Meanwhile, head interrogator, Lucius bends her knee to Schwarz as, now she can see the Goddess of Night, she realizes he actually is a hero summoned by a Goddess.

Now he knows Tachibana is also a hero, Lord Mercus asks her to marry him, because with Tachibana’s beauty and his knowledge, they could rule the entire economy, but Lucius beats up Mercus to stop him.

Schwarz then decides to stay in the town after he is offered a free place to stay, but Jinguuji and Tachiban leave and head towards the royal capital.

But on the road they see Lou the elf chief tied up in a passing carriage. They decide to ignore it as she is just too much trouble.

At the next town, which seems to be obsessed with squid, Tachibana goes missing. When Jinguuji discovers the carriage they saw earlier, he destroys it but doesn’t find Tachibana. Or Lou.

At that point, the carriage owner returns having sold Lou, and tells Jinguuji this town sacrifices a beautiful woman to the local Squid God every few months. That may also be why Tachibana has been kidnapped.

Meanwhile, Lou is shown tied up in a building with a man telling her she will be the sacrifice as soon as night falls.  But Lou is more happy about being told she has been chosen because she is beautiful than she is worried about being killed.

Until, that is, another man arrives with Tachibana slung over his shoulder and tells the first man she is more beautiful than Lou, so should be the sacrifice.

The silliness continues in Episode 6 with the arrival of the Goddess of Night, who is just as weird and farcical as every other character in this fantasy anime.

She also acts completely different than you may expect a Goddess to act, all laid-back and cool, which ties into the way all the other characters act as well.

Completely the opposite of what you expect in an isekai anime, which is why Fantasy Bishoujo Juniku Ojisan to is so much fun to watch. 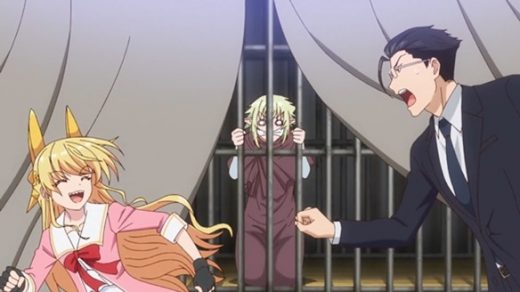 The funniest part of the episode, though, is how Lou gets kidnapped, Jinguuji and Tachibana don’t care, then Lou is sold and thinks she’s going to be ravished.

As she decides to just ‘accept her fate’, it turns out she’s actually going to be killed… because she’s beautiful. And so she’s even happier. But wait, no, here comes Tachibana… and she is even more beautiful.

Poor Lou. She just can’t win at all.

Episode 6 of Fantasy Bishoujo Juniku Ojisan to continues to push the farcical situations, the characters’ over-the-top reactions to every little thing, the on-going fights between Jinguuji and Tachibana (who really just need to get a room already), and the whole gender-bending theme that has run throughout this hilarious anime.

All of it done to maximum comedic effect.

So now, six episodes in, and not one has disappointed yet.

That’s why Fantasy Bishoujo Juniku Ojisan to is on an equal footing with my two other favorite anime of Winter, 2022 — Sasaki and Miyano and My Dress-Up Darling — with all three sitting firmly in my #1 spot.

Watch Episode 6 of Fantasy Bishoujo Juniku Ojisan to on Crunchyroll.