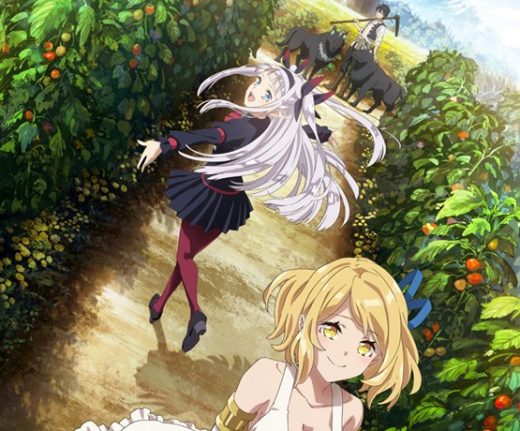 The upcoming Farming Life in Another World anime series got an utterly adorable teaser visual today. (see below)

The new Farming Life in Another World teaser visual features the beautiful angel Tia holding a bowl of freshly grown tomatoes in the foreground, while the cute blood sucking vampire Ru Rurushi rushes down the orchard pathway towards protagonist, and master farmer, Hiraku Machio.


Hiraku’s beautifully abundant farmland stretches out around them.

Along with the Farming Life in Another World teaser visual, we also got a January, 2023 premiere time for the fantasy isekai anime, along with the release of several main staff members and an official Twitter account.

They include Ryoichi Kuraya (Tsugumomo) who is directing the anime, and Touko Machida (I’ve Somehow Gotten Stronger When I Improved My Farm-Related Skills) who is in charge of series composition and scripts.

ZERO-G is in charge of anime production.

Farming Life in Another World (aka Isekai Nonbiri Nouka) is based on the light novel series of the same name written by Yasuyuki Tsurugi, and illustrated by Kinosuke Naitou.

One Peace Books is publishing the spin-off manga, and they have this to say about the plot:

After Hiraku dies of a serious illness, God brings him back to life, gives his health and youth back, and sends him to a fantasy world of his choice.

In order to enjoy his second shot, God bestows upon him the almighty farming tool! Watch as Hiraku digs, chops, and plows in another world in this laidback farming fantasy!

Unfortunately, neither the manga or the light novel series get particularly good reviews. Let’s hope then that the anime series is better.