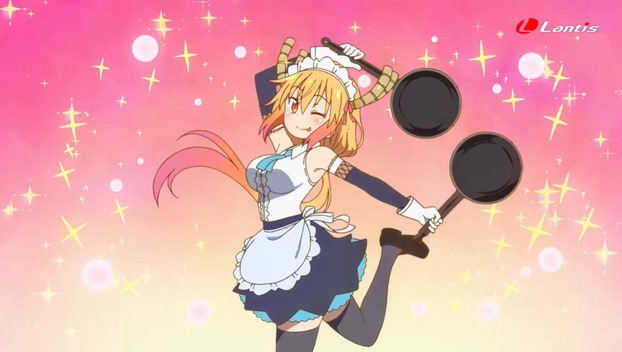 At least if the just released preview trailer featuring a few seconds of the song is anything to go by.

The song is Fhána’s ‘Ai no Supreme!‘ and, from the 15-second trailer featuring a few seconds of the song, it sounds as catchy and fun as the original theme.

The original theme song (‘Aozora no Rhapsody’), of course, was also performed by Fhána. A song that gave us the famous “chu-chu, yeah!” half the anime fans I know were singing for months.

No wonder the band was chosen to perform the theme for season two as well.

Now, with Fhána’s ‘Ai no Supreme!” and its cool rap sound, I’m sure millions of people, including me, will soon be rapping in Japanese as well.

The trailer also features some cute scenes from the second season of the popular slice-of-life series.

The upcoming second season — Miss Kobayashi’s Dragon Maid S — premieres in July. Crunchyroll will be streaming the series outside Japan.

Updated: Crunchyroll has also uploaded the full opening animation, including ‘Ai no Supreme’, and Fhána’s ‘Ai no Supreme!” got an incredibly cute full-length music video. Both are down there too. Yay!