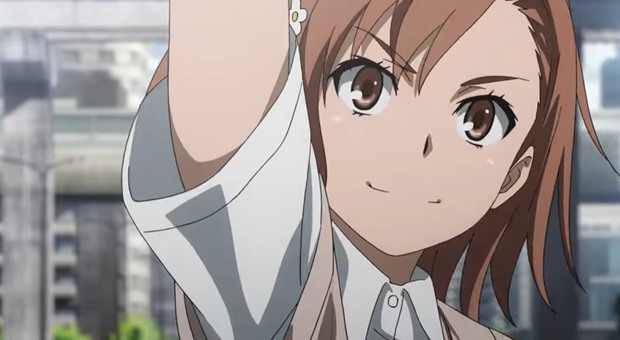 I am a sucker for fast, upbeat sounding anime theme songs that really get me hyped to watch a new episode of a favorite series.

Because not only is this track wild and exciting right from the get-go, it also features a brilliant guitar solo and song lyrics that perfectly describe the intense feelings Misaka has for protagonist Tōma.

Feelings she has had for a long time, but is too afraid to express (see full lyrics on Anime Song Lyrics):

The anime series also comes with an opening animation that is just as fast-paced and exciting, and matches the song perfectly.

‘Final Phase” by fripSide was written and composed by somposer Satoshi Yaginuma, who is also one half of the pop trance duo fripSide.

Satoshi has also written popular theme songs for the first and second seasons of A Certain Scientific Railgun, as well as theme songs for other anime series like Black Bullet, Ro-Kyu-Bu!, Koihime Musō and Juliet of Boarding School (Kishuku Gakkou no Juliet).

The Japanese composer has a massive number of singles and albums under his belt, both work affiliated with popular anime series and music he has composed solely for fripSide, as well as other music for video games.

Listen to the superb ‘Final Phase‘ by fripSide, the opening theme song for A Certain Scientific Railgun T, in the official music video for the song featuring fripSide below.

The video is shot in various locations around Tokyo and also features fripSide lead singer Yoshino Nanjō, along with the full version of the song.

You can currently watch A Certain Scientific Railgun T on Crunchyroll, although the series is currently paused due to the COVID-19 panic. It is due to resume, however, on July 24th when Episode 16 is finally due to air.

And, of course, if you love anime theme songs as much as we do, check out the rest of the tracks on our Best Anime Songs list on Leo Sigh.