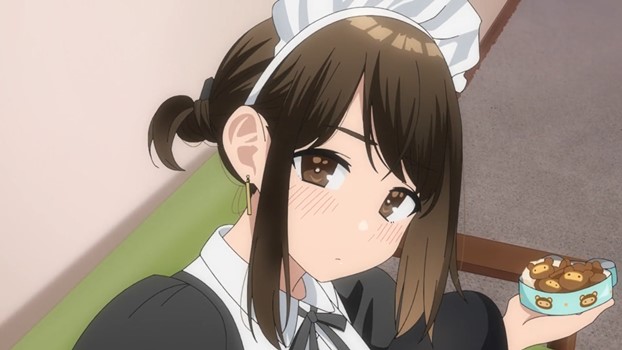 It is just me, or is every week’s new episode of Ganbare Douki-chan one of the highlights of your anime week?

This week, it’s Ganbare Douki-chan Episode 6 continuing on from where we left Douki-chan last week — embarrassed in front of her cat because she was trying on a maid outfit she looked adorably cute in.

Thankfully, in the opening scene of Episode 6, she’s still wearing the maid outfit but this time is holding the cookies Douki-kun gave her for White Day.

Then we hear a camera shutter click and the photograph of her looking scrumptious in that outfit, and titled “Look only at me, Master”, appears on Douki-kun’s phone.

Well…actually it doesn’t, as she then admits “Just kidding…I’d never send…” just as her cat apparently has other ideas and smashes its paw down onto the screen.

The photo immediately wings its way to her true love who is seemingly eager to hear from our heroine, as it isn’t three seconds later and Douki-chan gets the message that her photo has already been looked at.

Could her face be any redder? 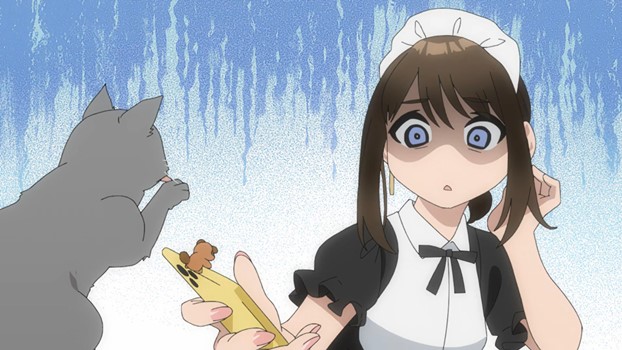 Fast forward to the day afterwards and Douki-chan is absent from work “sick”, according to Kouhai-chan who is happy to tell Douki-kun she won’t be coming in.

He breathes a sigh of relief, “That’s good…”.

Soon, Kouhai-chan is telling Douki-kun she will go over to his place and cook him dinner, followed by a visual of Kouhai lounging on his bed dressed in nothing but a shirt.

Luckily for Douki-chan’s future with Douki-kun, it’s just a dream she is having as she wakes bolt upright in bed and decides she probably should go to work after all.

But…when she gets there, her day really doesn’t get much better. Even though, by the end of the episode she has made a decision about how she must behave from now on.

If she doesn’t want to lose Douki-kun to Kouhai-chan, that is. 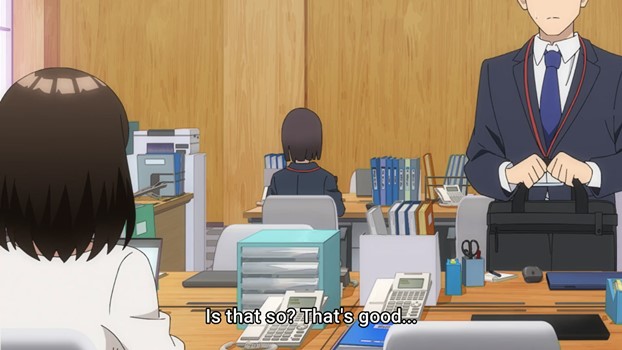 We are now six episodes in and Douki-chan still seems to have no idea Douki-kun appears to like her.

Come on, he was as flustered as she was when he found out she was out sick and immediately thought back to her sexy photograph in the maid outfit.

Remember too, when he got a similar photo from Kouhai-chan, it seemed all he could think about was that he would have preferred to get it from Douki-chan instead.

Well, now he did and….yep, the boy was sweating.

All I know is we only have 6 more episodes left of the first season of Ganbare Douki-chan, and I am hoping they will both figure out the other one likes them before we are done.

Because I love the dynamic between these two cute and funny people, and want them in my life for the rest of theirs.

Meanwhile, here are my musings on every episode of Ganbare Douki-chan, so far.

Ganbare Douki-chan is streaming on Crunchyroll.