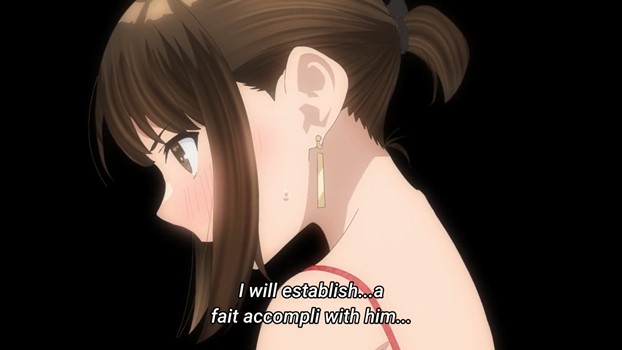 Although it’s probably not that surprising. Not when you consider, last week, she sent him a photograph of her wearing a maid outfit. By accident, of course. And he was clearly not upset.

As their conversation ends and she goes back to work, Douki-chan all red and embarrassed resolves to do what she has already made up her mind to do. Not play petty tricks, but instead tell him how she feels.

(Does anyone else think this may not go exactly the way she hopes? After all, the poor woman has the worst luck when it comes to the love of her life).

Consider the title of this week’s episode though — “A Co-worker Who Goes All-Out with Seductive Lingerie” — and, oh yikes, this probably will not end well.

Something Kouhai-chan also predicts as, seated alone on a train, she suddenly gets a premonition something bad is about to happen. 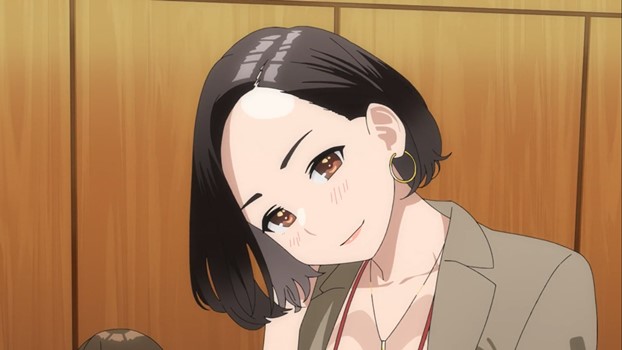 That something bad soon walks in on high heels, wearing a low-cut camisole top.

It’s the new client who, it turns out, was a friend of Douki-kun’s when he was in university. Interestingly, though, she hasn’t seen him since she spent the night at his place. (And no, we have no idea what that means).

After the meeting, with the overly friendly and quite pushy client, she thanks them both for their work and then suggests she and Douki-kun go out for a drink to celebrate their reunion. 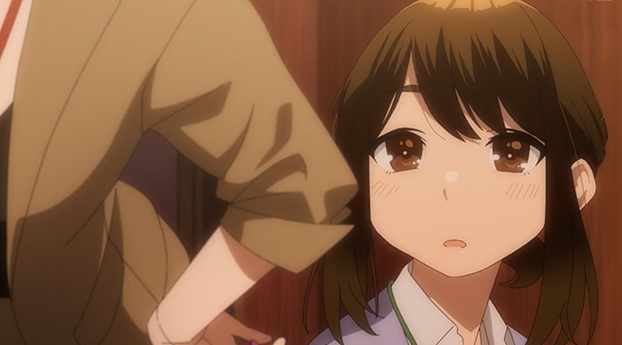 As Douki-chan realizes her dream of dinner with Douki-kun is about to become history, he surprises her by telling the client he cannot. He already has “dinner plans with a colleague”.

But…will Douki-chan get her dinner with the love of her life, or does the client have other plans?

Come on, he obviously likes her

Now, either Douki-kun is the biggest wimp in the world, or he does like Douki-chan. A lot.

After all, in Japan it is often thought to be rude if you turn down dinner or drinks with a client, but Douki-kun has no problem doing that. Not when it means he can have dinner with Douki-chan instead.

But…while he did stand up for Douki-chan tonight, somewhat, things could have gone better.

That’s why I do hope we get some kind of conclusion to this very sweet story by Episode 12. Because if we get five more episodes of bad things happening to Douki-chan, followed by she and Douki-kun never getting together, man, I’m going to be pissed.