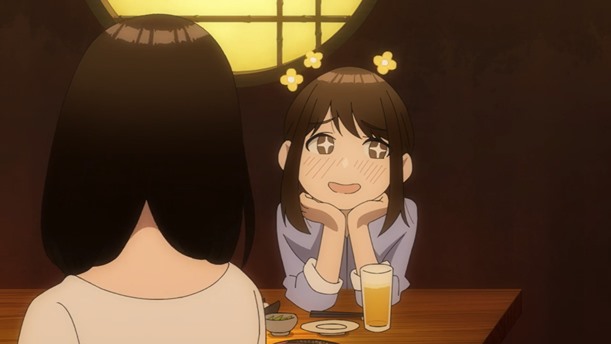 Ganbare, Douki-chan just gets stranger and stranger with Episode 9 a lot more like ‘girl on girl’ then anything else we have seen before.

Of course, Episode 9 follows Douki-chan still with her head in the clouds as she remembers she almost confessed her adoration to Douki-kun.

Until, of course, Senpai-san (Douki-kun’s old friend) and Kouhai-chan find them hiding down an alley, and insist they rejoin them for more drinks.

In Episode 9 of Ganbare, Douki-chan then, we are back in yet another bar, all four of them are drinking again and Douki-chan is reminiscing about how much ‘initiative’ Douki-kun showed when he grabbed her arm and ran away. (See Episode 8). 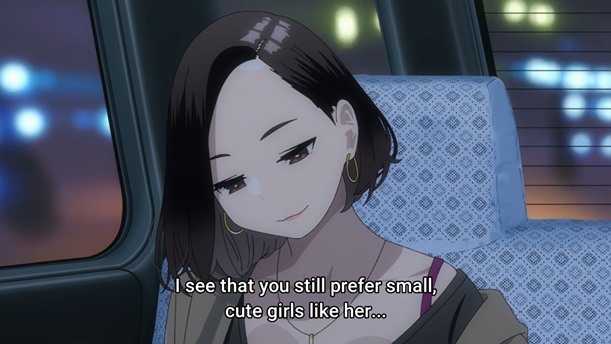 Soon the scene has moved into the back of a taxi, where we see Senpai-san who is still, remarkably, sober while Douki-kun is passed out in her lap.

It is then we really do learn for the first time that, what I have been saying from the beginning, is correct. YES. DOUKI-KUN LOVES DOUKI-CHAN — and it’s Senpai-san that admits it for him.

“I see that you still prefer small cute girls like her...”

Now, of course, it’s not Kouhai-chan she is talking about, as it wasn’t her arm Douki-kun grabbed and then ran away with.

Needless to say, if this had been a more ‘normal’ anime, by now Douki-chan and Douki-kun would be together and declaring their undying love. 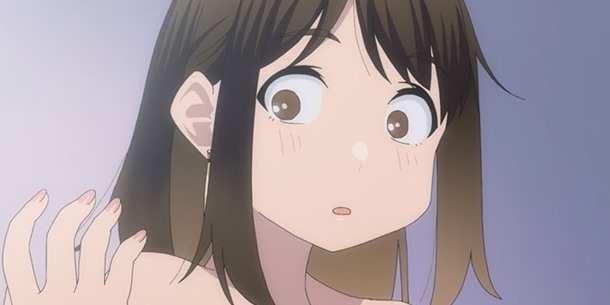 But, when Douki-chan wakes up in the morning at home and mysteriously finds herself in bed but not wearing any night clothes, who is it she wakes up next to?

And, surely, with only three more episodes to go, and with us now knowing for sure Douki-kun is in love with Douki-chan, will we get the happy ending so many of us are desperate to see?

Tune in to Ganbare, Douke-chan next week to find out.