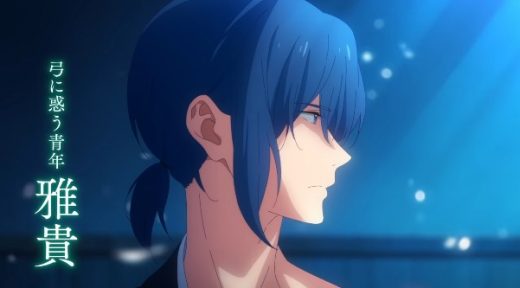 The film is the next installment in Kyoto Animation’s Tsurune franchise. The anime that tells the story of Minato and the other boys in his high school kyūdō club.

Gekijōban Tsurune: Hajimari no Issha (aka Tsurune The Movie: The Beginning Arrow) is being directed by Takuya Yamamura, who also directed the first season of the sports anime.

Miku Kadowaki (Miss Kobayashi’s Dragon Maid) is back as character designer, and Takuya Yamamura is also writing the film’s script.

According to the Gekijōban Tsurune: Hajimari no Issha teaser trailer,Yūto Uemura will also be back to play Minato Narumiya, with Shintarō Asanuma returning to voice Masaki Takigawa.

The film is based on the light novel series written by Kotoko Ayano and illustrated by Chinatsu Morimoto.

Watch its first teaser trailer below. As usual from KyoAni, that art style and animation is beautiful.