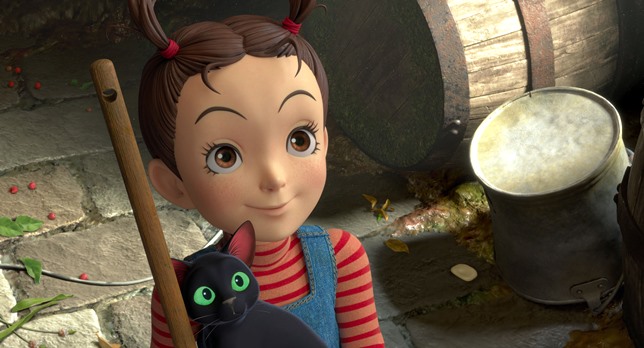 While the first scenes that were released from the upcoming Ghibli’s Earwig and the Witch film left me cold, I have got to say the latest trailer for this first CG-animated effort from Studio Ghibli makes the movie look amazing.

So much so, when GKIDS announced Earwig and the Witch would get a limited theatrical run and an HBO Max streaming debut in February, followed by a Limited Edition SteelBook, and a Blu-Ray/DVD and digital release, I was already heading to my bank account to see if pre-ordering at least one of these was an option.

Both will ship out on April 6th, and both have simply adorable packaging.

The SteelBook version of the film comes with these bonus features:

Bonus features on the Blu-Ray/DVD version are these:

The Earwig and the Witch film is 82 minutes long. It features both Japanese and English audio, as well as English subtitles so you can watch it either in its original version or dubbed.

It is based on the novel of the same name by Diana Wynne Jones.

Growing up in an orphanage in the British countryside, Earwig has no idea that her mother had magical powers. Her life changes dramatically when a strange couple takes her in, and she is forced to live with a selfish witch. As the headstrong young girl sets out to uncover the secrets of her new guardians, she discovers a world of spells and potions, and a mysterious song that may be the key to finding the family she has always wanted.

Now watch the recent Earwig and the Witch trailer, and then tell me that film does not look gorgeous!