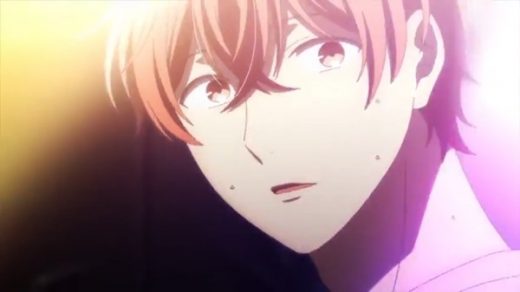 When it comes to anime songs that break your heart as soon as the first note begins to play, there isn’t a song more powerful than ‘Fuyu no Hanashi‘ (Mafuyu’s Song) from the recent Boys’ Love anime Given.

‘Fuyu no Hanashi‘ is composed and performed by Japanese singer songwriter Centimillimental, with lead vocals by Given lead actor Shōgo Yano (Mafuyu), and the first time you hear it on Given during the concert scene in Episode 9 it just breaks your heart.

Because it is not just the gorgeous melody along with that helluva bangin’ rock beat that makes this song so stunningly beautiful but so utterly devastating, it is the song’s lyrics that are so perfect for how Mafuyu feels about Yūki’s death.

And how broken he still is when he thinks about what he has lost.

The vocals by Shōgo Yano only serve to grab your heart in a vice-like grip even harder, and that scream mid-way through the track that seems to be pulled from Mafuyu’s very soul will drop you in your tracks.

For one helluva devastating song — a song that also serves as a long-needed pain diminisher for Mafuyu, if truth be told — you don’t get much better than ‘Fuyu no Hanashi‘ (Mafuyu’s Song) by Centimillimental and Shōgo Yano.

Listen to Fuyu no Hanashi by Centimillimental and Shōgo Yano in the original animated scene from Given Episode 9 down below.

The recorded version of the song is also down there on Gift — the Given album — Song #4.

And, if that isn’t enough, there are two stunning live performances of Fuyu no Hanashi (aka ‘Winter’s Song’) you should not miss.

The first is a live performance Centimillimental and Shōgo Yano gave of ‘Fuyu no Hanashi‘ with both taking turns singing.

The second is a live performance Shōgo Yano and his band gave that is just as powerful as the anime version.

Watch and listen to all of them.

And, of course, if you have not yet watched Given and the superb Given movie sequel, you can do that on Crunchyroll.

As one of the best Boys’ Love anime out there, featuring some of the most fabulous yaoi characters, you shouldn’t miss it.