The Gyokō no Nikuko-chan ending theme song ‘Taketen‘ got a music video this morning and, as might be expected from preview trailers of the upcoming anime film, the animated video is cute and the song is just as sweet.

‘Taketen’ is performed by Japanese pop rock band GReeeeN, and is one of two theme songs featured in the upcoming film.

The other — the opening theme song —  is a GReeeeN produced track, but this time a pretty cover of Takuro Yoshida’s ‘Image no Uta’, which is performed by 10-year-old voice actress and singer Kurumi Inagaki.

Along with the ‘Taketen‘  music video, the official site for the film also revealed the movie’s poster art. (see below) 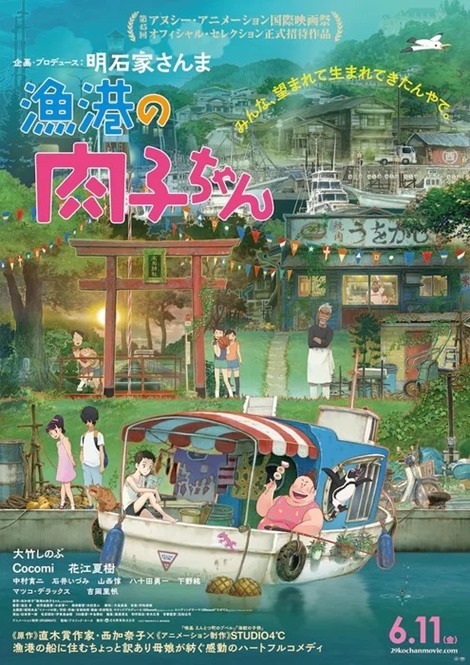 Gyokō no Nikuko-chan (aka Nikuko of the Fishing Harbor) is based on the Gentosha novel of the same name.

The film is being produced at Studio 4°C, with Ayumu Watanabe (Children of the Sea) directing, Satomi Ooshima (Hataraki Man) in charge of the script, and Kenichi Konishi (A Good Librarian Like a Good Shepherd) designing the characters.

Listen to the lovely Gyokō no Nikuko-chan ending theme song ‘Taketen‘ by GReeeeN in the new music video below, and enjoy that sweet animation, then check out the official trailer for the film below as well.