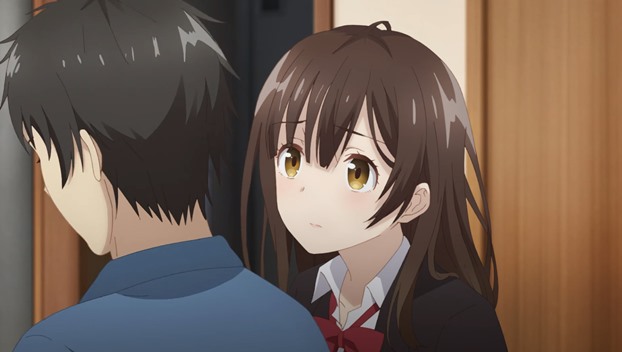 In this Higehiro, After Being Rejected I Shaved... Episode 2, “Cell Phone” recap and review, the episode begins with Yoshida trying to buy Sayu a phone, but she tells him she doesn’t need one. But, when she thanks him for the moisturizer he just bought her, and smiles, Yoshida feels like the smile is not genuine.

After all, there must be some reason why she ran away from home. A reason she is not telling him.


Higehiro, After Being Rejected I Shaved… Episode 2 “Cell Phone” recap

Back at home, Yoshida tells her to stop lying to him with her smiles. After all, while his apartment may not be her home, she is allowed to do what she wants there.

Being honest, Sayu asks him why he is so nice, as he is the nicest person she has ever met. She goes on to tell him she will try not to smile when she doesn’t mean it, but that she thinks it may be a habit.

The following day, Yoshida is at work when one of his juniors screws up the coding on a new project. Instead of getting angry with her, he asks her to fix it, and then buys her a bento box when she is still working close to the last train leaving.

As they eat dinner together, the girl, Mishima, tells him he is so nice. (Isn’t this a recurring theme?) She then asks him why he has been shaving his facial hair every day. Does he have a new girlfriend?

Yoshida confesses he was just turned down by Gotou-san. 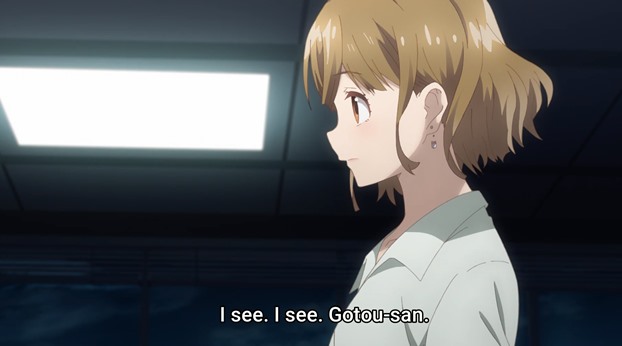 Mishima is shocked that Gouto-san rejected him, but then tells him she feels lucky and asks if he will go for a drink with her sometime.

At home, Sayu is waiting for Yoshida, who arrives home late, as she has made his dinner. He then realizes he needs a way to get hold of her should he be delayed, so the day afterwards he heads out to buy Sayu a cell phone.

His workmate, Hashimoto, goes with him to the cell phone shop and comments Yoshida must like Sayu if he is choosing her phone so carefully. He then warns him to be careful, as he won’t want her to fall in love.

As Yoshida is getting ready to leave work for the day, however, Gouto-san asks him if they can have dinner.

Over dinner, she asks him if he is nervous and he responds, “Of course”, as she rejected him.

Gouto-san laughs and tells him they can ask each other questions to help him calm down. 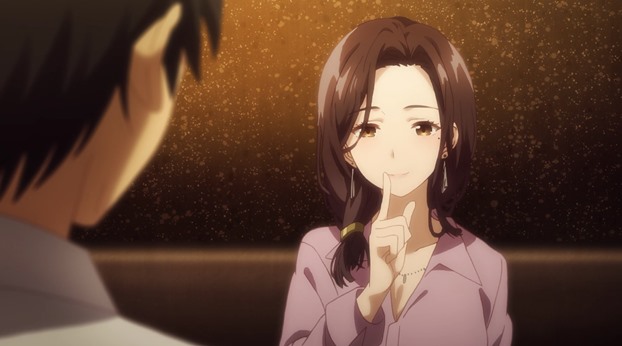 She then asks him if he is dating someone, and when he says “No”, she calls him a liar, going on to explain he always works late and now he does not. She has also noticed his shirts are ironed, and he is shaving his facial hair every day.

But when she tells him she thinks he and Mishima are dating, he tells her she is wrong.

Yoshida confesses he has been in love with Gouto-san since he began working at the company .He then asks her why she cares if he is dating someone. She has already rejected him.

Gouto-san says she doesn’t want a younger woman to grab him right after he has confessed to her, as that would not be right.

At home, Yoshida tells Sayu he went for dinner with Gouto-san. When she asks “It wasn’t fun?”, he tells her it was.

Sayu gives him a hug, and tells him to have a bath so he can soak away all the bad things.

After his bath, Yoshida gives Sayu the cell phone and tells her she needs to have it so he can contact her. 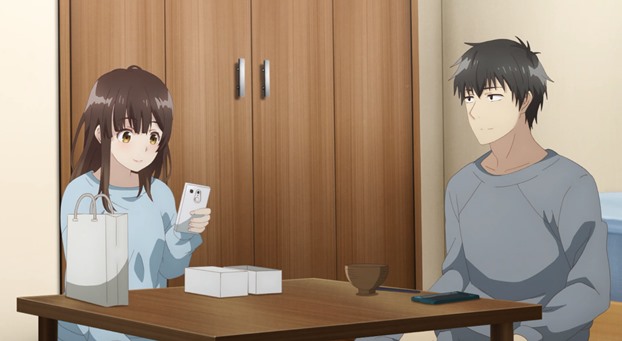 The two then add each other as friends on their phones, and she thanks him for the phone. The episode ends with Yoshida deciding he doesn’t understand teenage girls.

Higehiro, After Being Rejected I Shaved… Episode 2 “Cell Phone” review

Another lovely episode, with Yoshida becoming an even nicer guy, while Gouto-san seems a little manipulative. As if she is the type of woman that is only interested in a man when they are not interested in her?

Meanwhile, it is obvious there is more going on behind Sayu’s smile than she has admitted, but it may take us a while to find out.

There is also now the added complication of Yoshida’s workmate Mashima, as she obviously likes Yoshida and isn’t afraid of saying so.

However, Episode 2 of Higehiro, After Being Rejected I Shaved… ended in still a quite innocent place, but will that continue on in episode 3, or will things become difficult for Yoshida and Sayu?  Especially if Gouto-san turns out to be as manipulative as she appears here.

Watch this episode and every other episode of Higehiro, After Being Rejected I Shaved...on Crunchyroll. It really is a wonderfully wholesome show. So far, at least.

Get more recaps of each episode on Leo Sigh.