The second trailer for the new romantic comedy anime series Horimiya was released today and, wow, this looks like the characters are going to be not only cute but also interesting as well.

The trailer announces two new cast members — Seiichiro Yamashita (How to Keep a Mummy) will be voicing Toru Ishikawa, and Yurie Kozakai (Dropkick on my Devil!) is playing Yuki Yoskikawa — as well as gives us a quick look at character designs and animation.

The Horimiya anime series is based on the popular manga series by Daisuke Hagiwara.  It is being adapted by CloverWorks (The Promised Neverland), directed by Masashi Ishihama (Persona5 the Animation), with character design by Haruko Iizuka (Tamayura, Ensemble Stars!) and series composition and scripts by Takao Yoshioka (The Familiar of Zero). 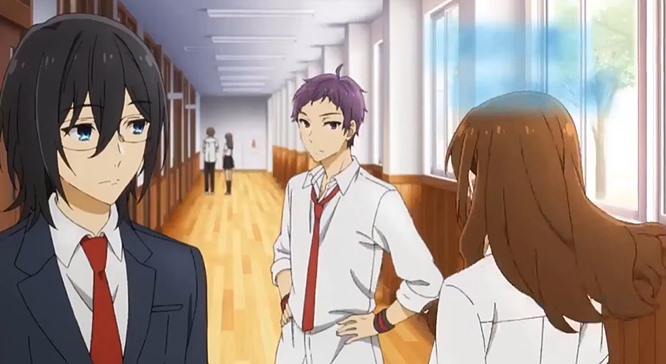 Horimiya (aka Hori-san to Miyamura-kun) tells the story of Hori and Miya — high school students who, while they may be one way at school, they act and look differently when they are away from their friends.

One day, the two meet outside school by accident and are surprised to see each other looking unlike anything the other may expect.

Soon they become very close friends, as they find themselves being able to show a side of themselves their other friends are not privy to. Not long after, they start to fall in love. (article cont. below…)

The new Horimiya trailer continues to make the upcoming anime series look like it may just be one of the best of the new season. After all, it has beautifully designed characters, most of them appear to be interesting and nice, the voice acting sounds great and the animation shown so far appears to be very well done.

When you thrown in the Masaru Yokoyama composed Horimiya soundtrack music, which is incredibly pretty, so far, I see nothing to dislike.

Watch the new Horimiya trailer below to see if you agree.

The anime series is set to premiere in January, 2021.