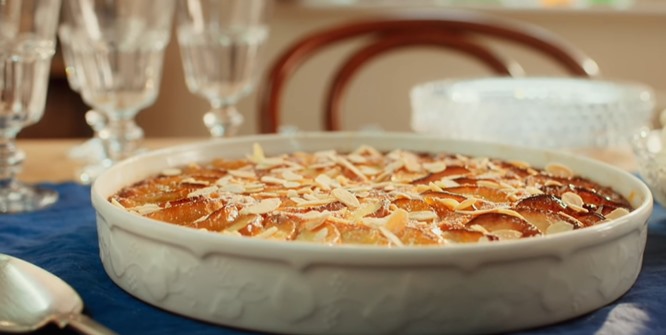 If you are looking for an incredibly simple but lovely looking dessert to make, you can’t go wrong with Mary Berry’s Brioche Frangipane Apple Pudding — a recipe from the British celebrity baker and cook’s new BBC TV series Mary Berry’s Simple Comforts — and one that is so darned easy to make.

Recipes that were all so fast and simple, even a novice cook like me had no problem making them.

Her Brioche Frangipane Apple Pudding, however, is literally one of the simplest desserts I have ever made.

Especially as it only requires inexpensive, non-complicated ingredients to make it, but it still looks so elegant when the now-cooked dish is placed in the middle of the table and the pudding served with ice cream or fresh cream.

Here’s how to make Mary Berry’s Brioche Frangipane Apple Pudding then if you want something that is pretty much fail-safe as well. 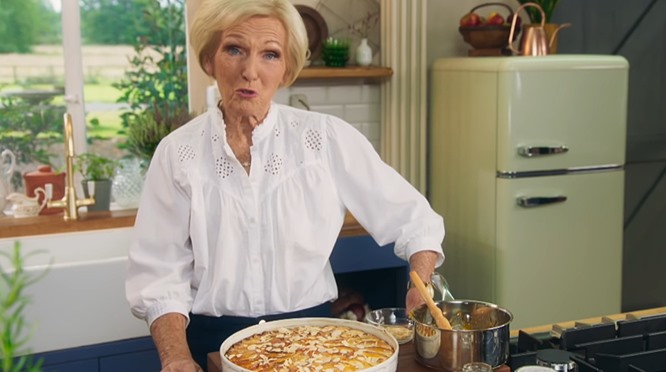 This type of brioche frangipane apple pudding can be served as is, with ice cream, fresh cream, custard or any other similar sauce you like.

And that is how to make Mary Berry’s Brioche Frangipane Apple Pudding. (video below)

The preparation time is less than 30 minutes and the cooking time just over that.

That means, if you are struggling to think up a delicious, simple dessert for your family or for guests, you could have this lovely pudding cooked and on the table ready to serve in less than an hour and a half.

Now watch the BBC video below to see just how Mary herself makes it.

If you are in the UK, you can also watch the Mary Berry’s Simple Comforts episode it came from, along with all the other episodes in the series on the BBC’s iPlayer.