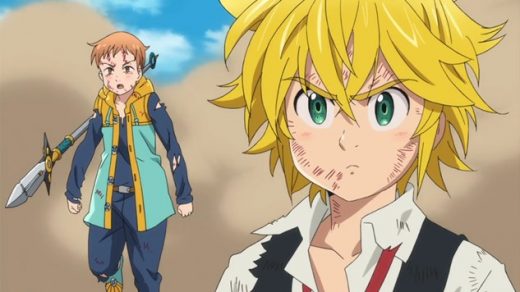 I was late to the viewing party when it comes to The Seven Deadly Sins anime — having only sat down to watch every episode plus all the films late last year.

But, even with all the information available online about the popular shounen series, I still managed to begin watching one of the films in an order that didn’t make sense.


So that you don’t make the same mistake I did, as it really was annoying to watch what I should be watching, then re-watch the quarter of the film I had seen too early later, here is all the information you need on how to watch The Seven Deadly Sins in order.

All the anime series, and all the films, that is. 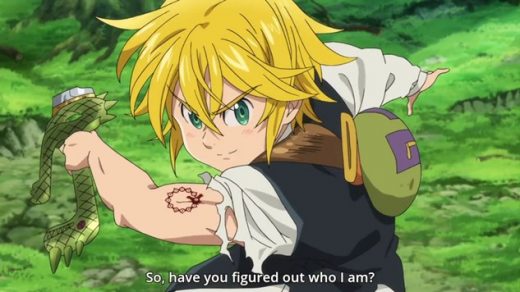 Not that it’s difficult as, in my opinion, the first season of The Seven Deadly Sins features some of the best episodes in the franchise, along with excellent animation and a gorgeous art style too.

It is also where you are introduced to each of the main characters, and fall in love with most of them.

Elizabeth doesn’t believe this, especially as the kingdom has now been taken over by the Holy Knights, the group the Sins originally fought, and has since descended into tyranny.

Instead, Elizabeth believes the Sins are the people who can help her defeat the Holy Knights and win the kingdom back. But how can she find them? 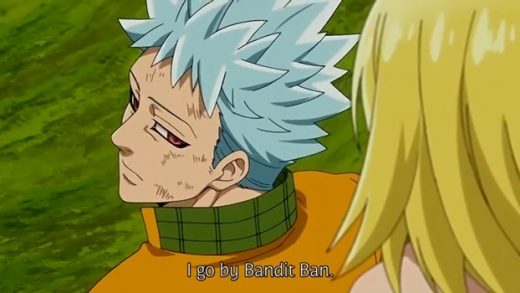 These are OVA that appeared with the 15th and 16th volumes of the manga. They follow on from the first season of the anime — in that they add information about some of the characters, in particular Ban.

The first OVA tells Ban’s story, what happened to him in his childhood and how he became the way he is now. While some people advise skipping this, to me it filled in many gaps in the series when it comes to Ban’s motivations, and made me like him even more.

No, it doesn’t add any information you need to know to enjoy the main series, but it is still extremely fun. 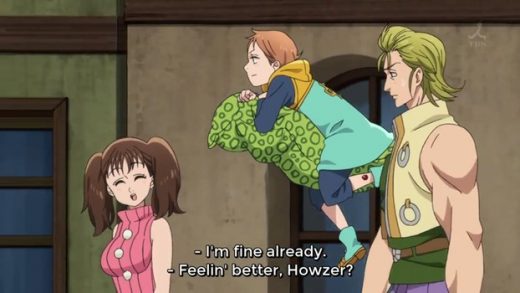 The Seven Deadly Sins: Signs of Holy War (aka Nanatsu no Taizai: Seisen no Shirushi) (Season 2? Sort of) — 4 Episodes

A four-episode anime special that starts off as mellow as can be with the Sins having beaten the Holy Knights and now back in Liones relaxing.

Days of cooking, drinking, hanging out with friends, the Sins entering a community fighting competition, the guys helping Gowther to act more human, and even King trying to muster up courage to tell Diane how he feels about her.

But, as the four episodes continue, signs of a Holy War begin to appear, and the scene is soon set for the gloriousness of Season 3?

Oddly, this was labeled by the studio as The Seven Deadly Sins Season 2. It’s not. Not even close. 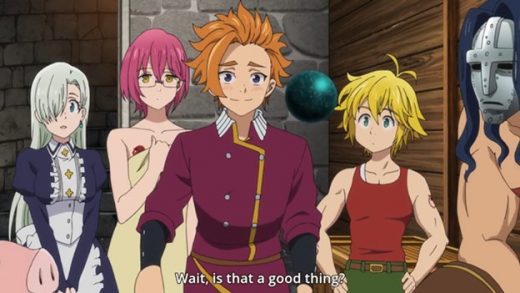 The Seven Deadly Sins: Revival of the Commandments (aka Nanatsu no Taizai: Imashime no Fukkatsu) (Season 3) — 24 Episodes

Because it was three years between Season 1 and the release of Season 3 (which is really Season 2), the first episode (Episode 0) of The Seven Deadly Sins: Revival of the Commandments is a recap of Season 1. If you have watched that recently, you might as well skip it.

Just when you think the Seven Deadly Sins can settle down and be happy, the 24-episode series begins with the Sins separating and heading off on different personal missions, but trouble is brewing.

Holy Knight Hendrickson, who is back in his human form, breaks the age old demon seal. This allows ‘the Ten Commandments’, some of the strongest demons in hell, to walk into the world.

Soon the Seven Deadly Sins are tasked with finding the Commandments and stopping them. Before they destroy all of Britannia and beyond. 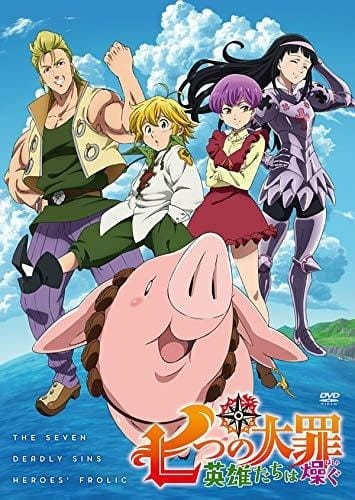 A one-episode OVA that, if you are a big fan of The Seven Deadly Sins is a must-watch as it adapts a chapter from the manga series you won’t find anywhere else.

This one features Hawk fighting Howzer after using one of Merlin’s magical items, Princess Veronica deciding to get stronger and so doubling-down on her training, the bond between Harlequin and Helbram being revealed, and the Sins heading off for a beach vacation.

The OVA is much more difficult to find than most of the rest of the series, which is exclusively licensed by Netflix, but it is out there if you persevere. 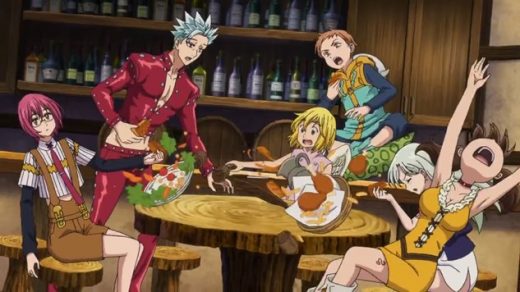 The Seven Deadly Sins the Movie: Prisoners of the Sky film (aka Nanatsu no Taizai: Tenkuu no Torawarebito)

A certain segment of the fandom didn’t like Prisoners of the Sky and sometimes warn, if you are looking for information on how to watch The Seven Deadly Sins in order, skip this film.

The Seven Deadly Sins the Movie: Prisoners of the Sky is a good, old-fashioned yarn that starts off with Meliodas and Hawk in search of the mystical ‘Sky Fish’, a fish that is supposedly so wonderful it is the basis for delicious food.

In their search, they fall into a pond that suddenly transports them to a strange kingdom in the sky. Here, they find themselves surrounded by beings called Celestials — one of whom looks so similar to Melodias, he could be his twin — except he has wings.

As Melodias is imprisoned as ‘an enemy of the Sky Kingdom’, the kingdom’s real threat becomes apparent. The Six Knights of Black who intend to break the 3,000 year old Great Oshiro’s and allow the demon in it to be freed.

Will Melodias be able to save the Sky Kingdom and all the people living in it, and will the rest of The Seven Deadly Sins arrive in time to help? 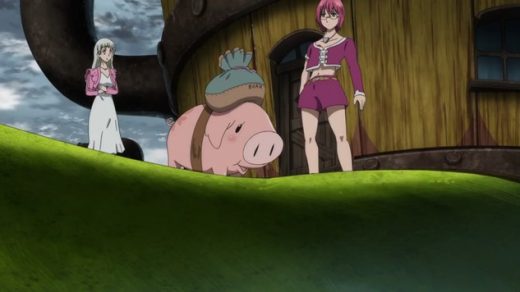 The Seven Deadly Sins: Wrath of the Gods (Season 4) (aka Nanatsu no Taizai: Kamigami no Gekirin) — 24 Episodes

That’s because the franchise was moved from A-1 Pictures, who did an amazing job with the art and animation of the previous Seven Deadly Sins releases, to Studio Deen who pretty much walked roughshod over them.

That being said, honestly, once it gets going, the fourth season of The Seven Deadly Sins is nowhere near as bad as what some fans would have you believe.

In fact, the only comment I have on this and on all the Seven Deadly Sins releases overall is WATCH THE SUBBED VERSION and not the dubbed as, while the voice cast of the original Japanese version are amazing, the American dubbed version is horrific — but nowhere worse than in the performance of the actor who voices Melodias.

As for The Seven Deadly Sins: Wrath of the Gods, it is now time for the Sins to become as strong as humanly (read inhumanely) possible, so they can defeat the 10 Commandments once and for all.

Much of this season involves the Sins learning more about their past, the emergence of Melodias’ brother, and how past decisions and events have had an enormous impact on the current day. 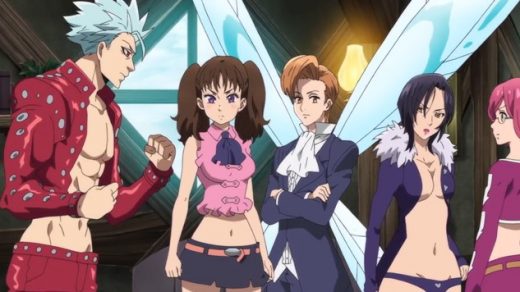 Another danger threatens the Kingdom of Liones and it is up to The Seven Deadly Sins to destroy it.

The problem comes in when our heroes seem to be stuck battling both the forces of hell and of heaven — both of whom seem to be just as villainous as each other.

Meanwhile, Elizabeth has been kidnapped, Ban is trapped in Purgatory and Melodias is about to turn into the most powerful demon in the world — helped on by his brother, the evil Zeldris. 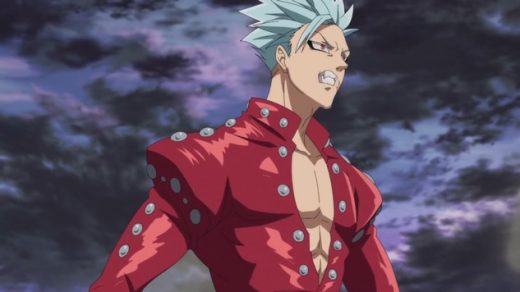 The second film in the franchise is based on an original story by mangaka Nakaba Suzuki — the writer and illustrator of the original The Seven Deadly Sins series.

While the world is supposedly at peace, Melodias and Elizabeth have set off on a journey across Britannia, and Diane and King get married.

Suddenly, hordes of fairies and giants start to attack everyone who participated in the Holy War.

It is now time for Melodias and the other Sins to figure out why the attack took place, and how to make sure it doesn’t fire up another war between various factions that could destroy everything they have worked to create.

And that is how to watch The Seven Deadly Sins in order. You can watch almost everything on this list, except the OVAs, on Netflix.

While it currently looks like there will not be a Season 6 of the franchise, there is another two-part Seven Deadly Sins movie — Grudge of Edinburgh — in production, with the first part premiering sometime in 2022.

The problem is both the animation and CGI look terrible so far. Yikes!