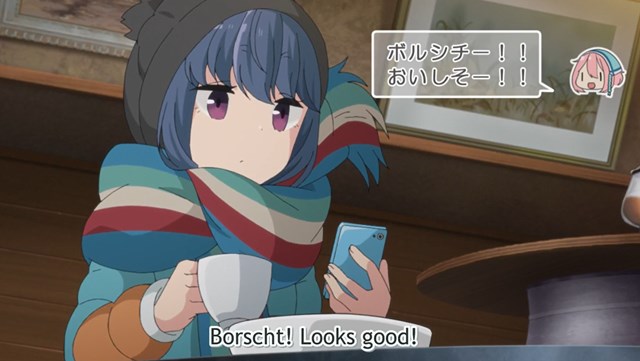 One of my absolute favorite anime of all time is Yuru Camp, (aka Laid-Back Camp), an anime series about a group of Japanese school girls who love camping and so decide to take camping trips together as part of the Outdoor Activities Club at their school.

The series follows them as they head to gorgeous camping spots around Japan (Mount Fuji, oh how lovely!), and spend their time sitting around the campfire cooking delicious food and chatting.

The artwork is gorgeous and the music one of the best anime soundtracks of the last few years as it is so laid-back, pleasant and comforting.

It is, and will always be, my favorite cute girls doing cute things anime ever released and one I recommend to anyone who likes the genre.

If you plan on diving in and watching it then, here is how to watch Yuru Camp in order — the series, the specials and the spinoff.

Laid-Back Camp begins with Rin Shima, who has always camped on her own since her grandfather died. On one of her solitary trips, however, she bumps into Nadeshiko Kagamihara, who has cycled up the steep hill to see a view of Mount Fuji only to fall asleep due to exhaustion.

When she wakes up, it is dark and she is all alone — until, that is, she comes across Rin just coming out of an empty toilet block.

After eating curry noodles around the fire and out of the scary dark, Nadeshiko’s sister comes to pick her up. Rin thinks this is the last she will see of Nadeshiko even though the girl shouts as she is leaving “Let’s go on a proper camping trip next time”.

Back at school a few days later, however, and things begin to change.

Laid-Back Camp (Yuru Camp) Season 1 aired from January to March, 2018. The anime series has 12 episodes. In my mind, every one of them is perfect.

You can watch the first episode of Season 1 of Laid-Back Camp in the YouTube video above. The rest of the season is available to stream on Crunchyroll.

There are three Yuru Camp specials that you can watch after the first season.

The first is Yuru Camp Episode 00, which is a prequel to the first season and follows the girls who first started the Outdoor Activities Club.

It should still be watched after the first season ends as it doesn’t add anything to the main season’s story, just follows some of the same characters. The episode is just over 5 minutes in length, so a quick but fun watch.

The second is Yuru Camp — Hora Camp where the girls talk about different countries’ camping styles, and Aoi plays a trick on Nadeshiko and the others.

The third and last Yuru Camp special is Saba Camp aka Survival Camp. The girls take a winter flight to Australia to camp but, on the way, the plane crashes and they are stranded on a desert island. They must use their camping skills to find food and build a shelter.

All three episodes can be watched after the first season of Yuru Camp, and all are entertaining and filled with the same jokes and laughs as the main series.

The episodes were released on the anime’s Blu-ray and DVDs, but can also be found in various places around the Internet. 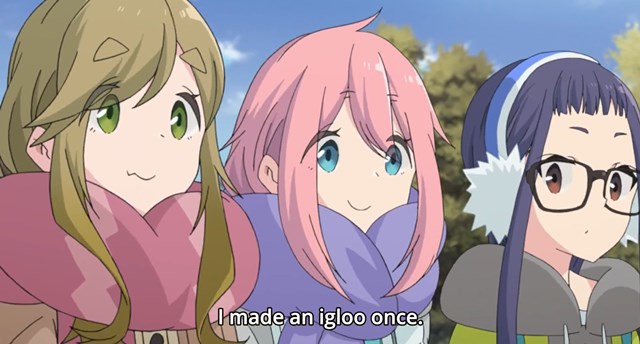 Heya Camp is a spin-off series of 12 short episodes (an average of 3 minutes) that aired between January and March, 2020. They star three characters from the main series — Nadeshiko Kagamihara, Aoi Inuyama, and Chiaki Oogaki  (left to right above) — who decide to participate in the Yamanashi Kids’ Stamp Rally.

The stamp rally asks kids to travel to different famous locations and collect stamps when they get there. The kids with the most stamps win prizes.

Heya Camp is not as interesting or cute as the Yuru Camp main series, but what can you expect in 3-minute episodes. Main girl Rin only appears in two of them as well, which is a bit of a disappointment.

Overall, as you can watch the entire series in just over half an hour, it is still a fun one to add to your anime viewing and is entertaining enough.

You can watch all 12 episodes of Heya Camp on Crunchyroll. 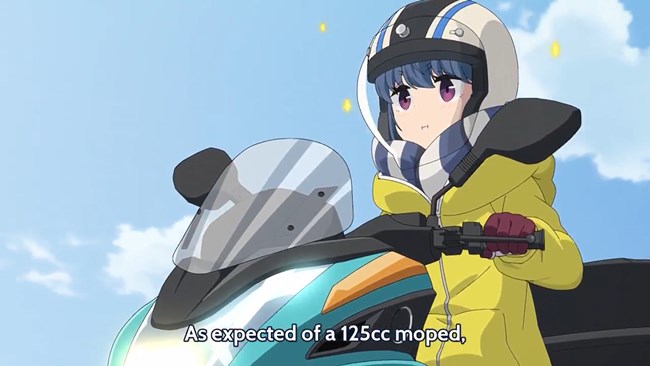 An 11-minute special episode on the Blu-ray release of Season 1, unless you really really love Rin and have to see every second of footage ever created of her, give it a skip.

After all, not only has Rin mysteriously lost her adorable and perfect-for-her bun hairstyle, the short is nothing more than an advertisement for Yamaha.

A shame the production company decided to go in this direction for the Blu-ray as, instead of a real special episode, we got paid advertising in the guise of an anime.

Albeit with very pretty artwork.

The second season of Yuru Camp was originally due to be released some time in 2020, but finally made it to our favorite streaming service (Crunchyroll) in January, 2021.

And, yes, the 13 episodes of Laid-Back Camp, Season 2 are just as wonderful as the first season, especially because the girls head out on a major road trip together.

The season starts off with Rin taking a 2-day trip over the New Year holiday so she can see the first sunrise of the year, only to get stuck away from home due to bad weather.

Later in the season, the girls set out together for a major camping trip on Izu peninsula, this time to celebrate Nadeshiko and Aoi’s birthdays. The Laid-Back Camp full-length movie is due to premiere this summer, and reportedly features our favorite camping girls all grown up.

While not much more has been released about the film other than that, several very cute key visuals showing the main characters have already been released, with more to come before the movie premieres.

And now you know how to watch Yuru Camp in order — so far, that is.

RELATED: How to watch DanMachi in order

How to watch Sword Art Online in the right order

How to watch Yuru Yuri in the right order