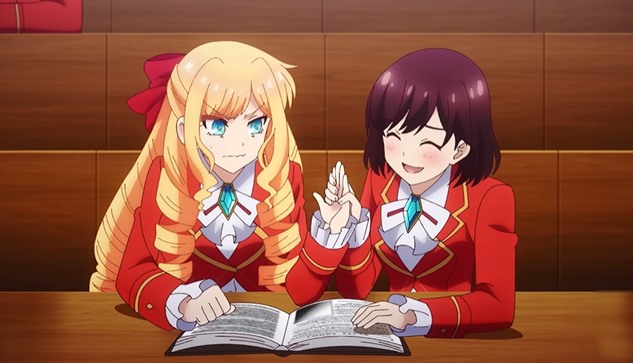 The popular Japanese light novel series I’m in Love with the Villainess by Inori Hanagata is getting an anime adaptation, after its manga adaptation has been just as successful as the novels.

The I’m in Love with the Villainess anime got its first visual today, along with a teaser trailer featuring office worker Ohashi Rei being isekai-ed into the world of her favorite otome game, and immediately deciding to romantically pursue the game’s villain, the beautiful Claire Francois.


Of course, as you might expect, Claire has zero interest in being romanced by Rei, causing her to react quite strongly to her pursuit.

The I’m in Love with the Villainess teaser trailer also revealed the anime’s two main voice actors — Yuu Serizawa (Shera in How Not to Summon a Demon Lord) who is voicing Rei, and Karin Nanami (Yuriko in Kakegurui) who plays Claire.

I’m in Love with the Villainess (aka Watashi no Oshi wa Akuyaku Reijou in Japan) is directed by Hideaki Ooba (Dr. Ramune -Mysterious Disease Specialist), with series composition by Ayumu Hisao (Kono Oto Tomare!), and Youko Satou (Love of Kill) in charge of character designs.

Seven Seas has this to say about the plot:

When corporate worker Rei Ohashi finds herself reborn as the protagonist of her favorite dating sim, it’s the perfect opportunity to do what she’s always wanted—seduce the villainess!

In her previous life, Rei had no interest in the princes the game had to offer. She only had eyes for Claire François, her nemesis. Now, armed with her extensive knowledge of the game, and her undying love for Claire, will Rei finally be able to win over the woman of her dreams?

Watch the just-released I’m in Love with the Villainess teaser trailer below to see just how far Claire will go. The anime itself is due out sometime in 2023.

Color me excited, as the manga series is fabulous.